The Drive-By Platform
Across the Asphalt to Terminal 3

Spanning roughly 550 by 30 meters (with a surface area of 15,300 square meters), the drive-by platform has a height of around 10 meters and is flanked by the access and exit ramps. It will let cars and cabs drive straight up to the entrance to the check-in hall and park on short-stay spaces there.

The work to build the foundation for the drive-by platform is clearly visible in this bird’s-eye view.

Some of the massive supports are already standing in rows, with the formwork removed.

V-shaped supports hold up the drive-by platform, which travelers and visitors will reach via an access ramp that has already been completed.

The superstructure for the drive-by platform rests on the supports.

A total of 70 V-shaped supports are needed.

The drive-by platform links the access and exit ramps.

The drive-by platform is being completed step by step.

With a Soft Touch

A bridge structure this large requires a sturdy foundation. First, in mid-2019, piles were anchored in the ground. Equipment weighing up to 155 tonnes was used to drill holes 13 meters deep into the ground for them. It was a challenge for the construction workers, who had to control these enormous machines with surgical precision. The piles were then topped with special caps to create a base for the supports of the drive-by platform. A total of 70 of them hold up the bridge structure, 56 arranged in a straight line running east to west. Utility lines, sewers and so on pass through them.

The structural engineers had to meet special requirements while designing the V-shaped supports. A full-size test support was made first to make sure that they would actually perform as required and if so give the green light for work to proceed. Production of them began in the first quarter of 2020. The same sequence of three steps was followed for each one: place the formwork, mount the rebars, and then pour the concrete. Formwork and rebars were appropriately placed to create the special shape of the supports for the drive-by platform. Finally, self-compacting concrete was poured in from above. Due to the supports’ great height of about 10 meters, the entire process had to be meticulously recorded and monitored. The reason is that concrete is heavy, yet the pressure it exerts on the formwork couldn’t be allowed to exceed a certain limit. Once the first supports were finished, preparations for building the superstructure could begin. A total of 14 concrete sections with a length of 36 meters had to be made so that travelers and visitors would later be able to conveniently drive right up to the entrance of the main terminal building.

But why did Fraport choose the complex V-shape for the supports? Esthetic considerations were only secondary. The main reason is that this solution leaves more space underneath for vehicles to maneuver than conventional supports, which would have had to be placed closer together.

An elevated drive-by platform lets passengers arriving by car or taxi go straight to the entrance of the new Terminal 3 on the departures level. It measures more than half a kilometer long by three meters wide. The concrete for the individual sections was poured in shallow formwork basins. After it cured, the formwork was removed and reused for another section. The construction workers used so-called formwork wagons for this, in other words huge mobile support structures integrating all relevant parts for a section. The company of PERI supplied them for Terminal 3.

How it looks: the drive-by platform with its distinctive V-shaped supports.

And here at a curve. But how was it made?

A completely cast section of the drive-by platform. Photograph courtesy of PERI in Weissenhorn, Germany

The premade formwork for the sharply angled V-shaped supports of the drive-by platform posed special challenges. Photograph courtesy of PERI in Weissenhorn, Germany

Customized so-called formwork wagons – gigantic movable constructions – were essential for the surfacing work. They carried the formwork for pouring the concrete a section at a time.

It can take up to 16 hours to pour the concrete for a single section, and it’s essential to avoid interrupting the work. Photograph courtesy of PERI in Weissenhorn, Germany

A gigantic construction site like the one for the new terminal bustles with activity until late in the evening. Photograph courtesy of PERI in Weissenhorn, Germany

After a section has been poured and cured, integrated hydraulics advance the formwork wagon, which weighs tonnes, to begin work on the next section. Photograph courtesy of PERI in Weissenhorn, Germany

Work to create the bridge of the drive-by platform, which is as large as two soccer fields …

… and comprises a total of 14 sections, each of which is about 40 meters long.

View of the bridge of the drive-by platform from above. 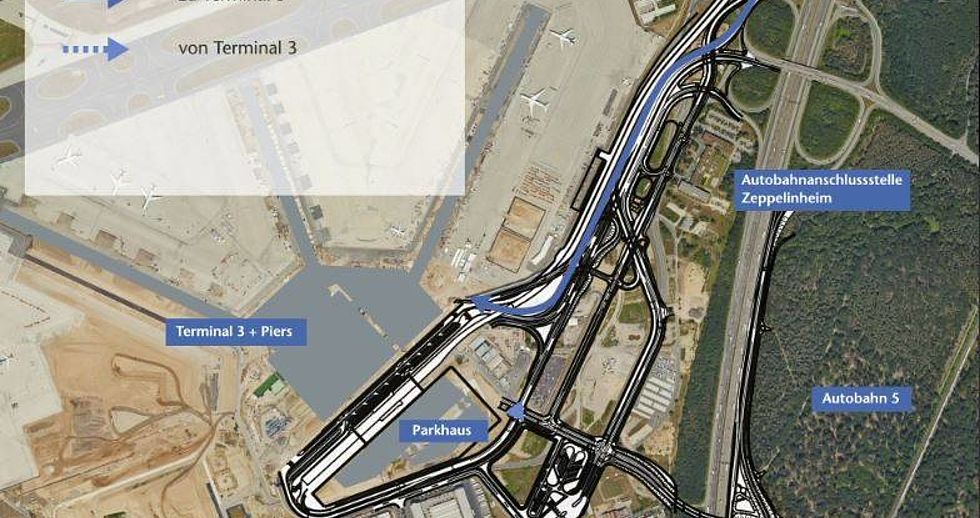 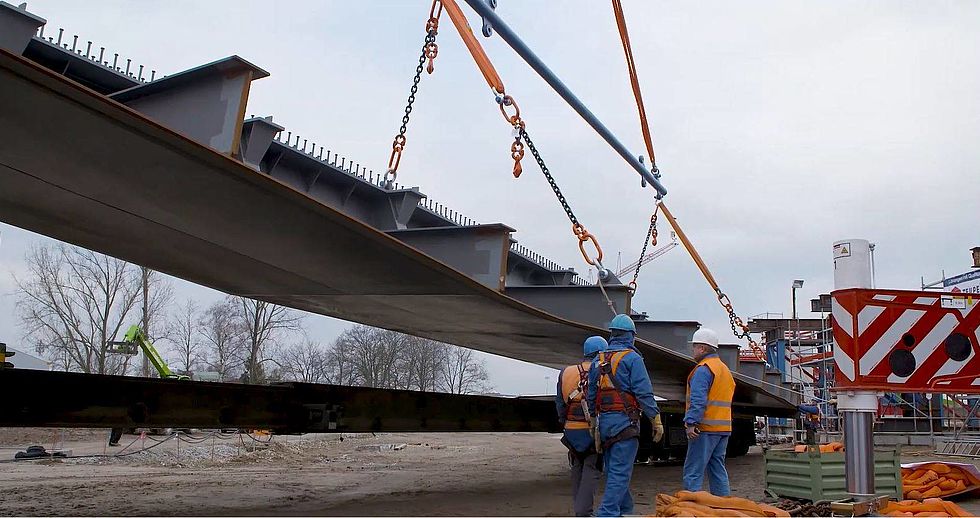 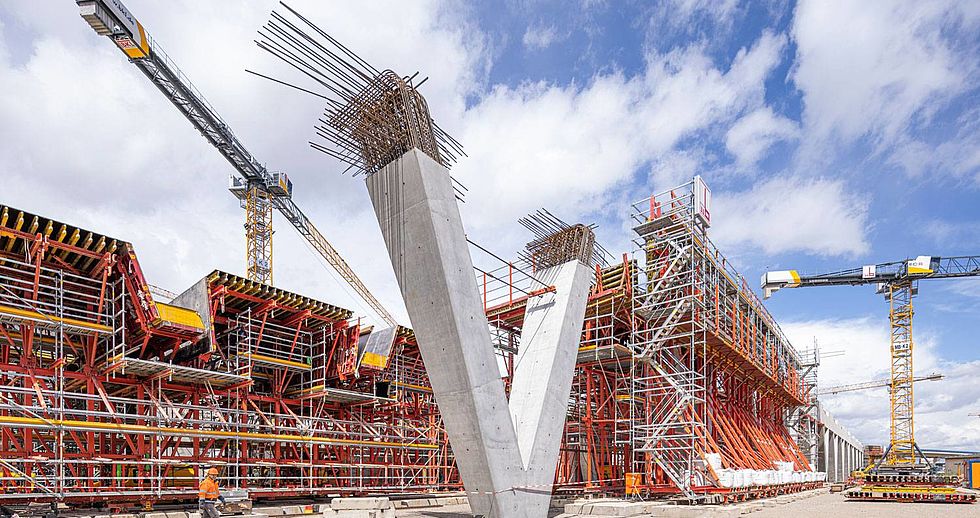 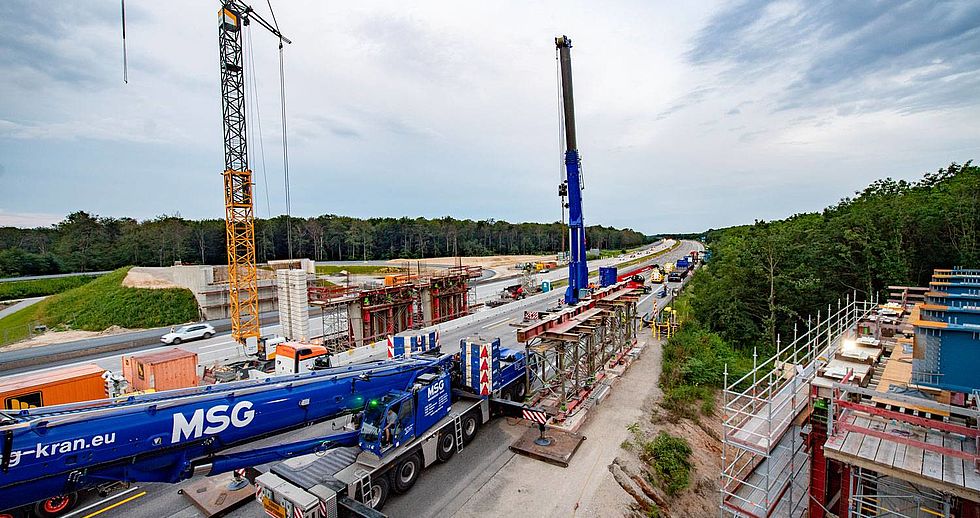 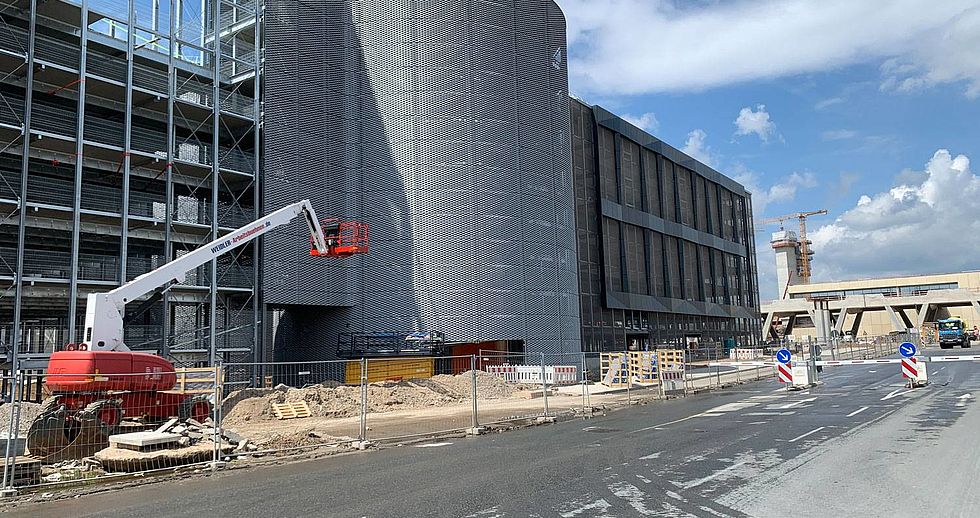