At the Heart of Terminal 3

The main building is the heart and core of Terminal 3. Here passengers will begin their journeys and be welcomed back by loved ones when returning. Travelers and visitors will arrive on the platform in front by car, bus, or the airport’s new Sky Line train, then enter the departure hall where passengers can check in and drop off their luggage.

Thanks to floor-to-ceiling plate glass windows and an impressively high ceiling – a Boeing 747-800 could almost fit beneath it – it will be expansive and flooded with light. 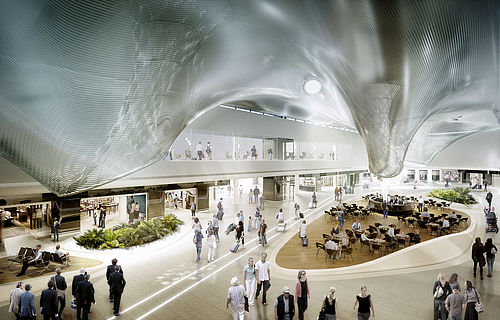 The futuristically designed ceiling of the marketplace in Terminal 3 admits plenty of daylight. Visualisation: www.moka-studio.com

There will also be lots of interesting stuff behind the scenes. For example, a sturdy tension grid―an almost invisible network of tightly woven steel wire rope cables forming a taut catwalk strong enough for maintenance technicians to walk on―will be 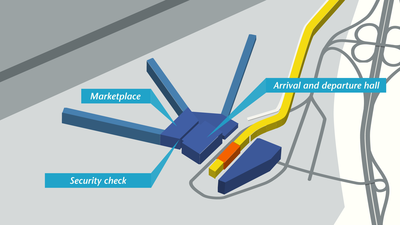 suspended 2.6 meters below the ceiling, leaving ample space for lighting, sprinkler systems, and other equipment above it.

After the check-in area, travellers pass through security checks to the futuristic marketplace with its diverse boutiques and restaurants, which invite them to linger. A special eye-catcher awaits them: The ceiling consists of drop-shaped steel structures. This special feature is a custom-made design for the new terminal.

Those who deplane at one of the new piers – H and J – will leave Terminal 3 via the arrival hall directly underneath the departures level. It will initially be equipped with eight baggage carousels.

The main building of the new terminal will incorporate an interesting feature: its exterior won’t run straight up from the ground. Instead, it will slant inward before reversing course and angling out again, creating a kink in the middle. Although this will give the terminal building an attractively avantgarde look, it hasn’t been designed like this for purely esthetic reasons. Glass and metal surfaces can reflect radar beams and distort the readings of the systems used to track the paths of arriving, departing 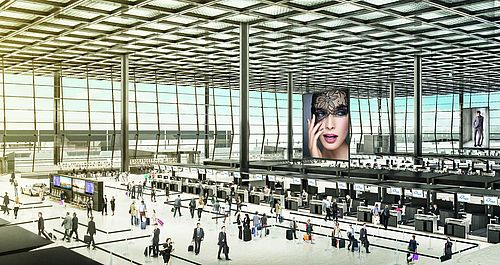 The spacious departure hall is an important part of the main Terminal 3 building. Source: Fraport AG / © Christoph Mäckler Architekten and taxiing aircraft, even conjuring up multiple phantom images on flight controllers’ screens. This naturally makes it much harder for them to safely guide air and ground traffic. For safety reasons, Deutsche Flugsicherung (DFS) – the company in charge of air traffic control in Germany – requires the exteriors of large buildings within the range of its radar systems to meet very strict criteria. One of the available options, which has been chosen for Terminal 3, is to slightly angle them. Instead of bouncing straight back and causing problems, radar signals are reflected toward areas where they are harmlessly scattered and absorbed.

Cross section of the main building at the departure hall. Click on the digits for details.

How on earth do you install a roof the size of two-and-a-half soccer fields? This was a huge challenge for the designers of Terminal 3. The original plan was for heavy-duty cranes stationed on opposite sides of the building to slide the roof onto it in one piece. However, the decision was then made to start building Pier G, which extends 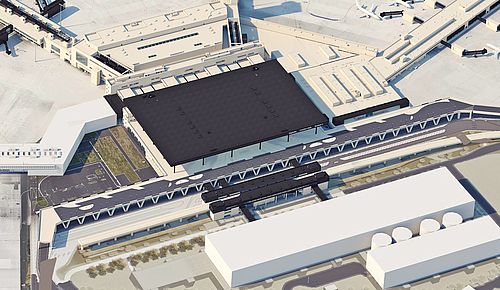 The roof of the departure hall is pushed onto the building, one section after another. Source: Fraport AG / © Christoph Mäckler Architekten out from one side of the main building, earlier than originally planned, so that was no longer an option. The solution the engineers then came up with was to divide the four-meter-thick roof into sections and push them on one after the other from a hydraulic platform. The principle is similar to how the slats of an articulated awning are extended or retracted.

To breathe life into the terminal’s main building, it will be filled with a host of technical systems for everything from plumbing, heating and ventilation to lighting and security. This will give rise to a very intricate mosaic. An army of skilled workers representing a wide variety of manual trades will swarm over the site getting everything ready.

One trade is in charge of installing elevators and escalators. With seven floors, the main terminal building boasts quite a few vertical meters. But to make sure passengers will not have to climb mountains, a total of 91 elevators and 37 escalators. That way, even the most heavily loaded traveller can comfortably make their way to and from will be available the plane. An innovative control technology, which digitally links the elevators with each other will further ensure short waiting times for the next available elevator.

One especially important challenge is to put the heat emitted by people and electrical systems to good use. If properly done, this greatly reduces the need to heat on cold days. When it gets hot in the summertime, special cooling systems will ensure a comfortable indoor temperature.

After the work done by each trade is completed, everything is meticulously double-checked. In this way, the highly complex heart of Terminal 3 is gradually taking shape so it can begin beating as a whole after its completion in 2024.

The First Brick in the Wall

Just as the dry excavation started with the ceremonial ground-breaking ceremony, the first stone of the new terminal is symbolically laid before the building is constructed. On 29 April 2019, the laying of the foundation stone on the Terminal 3 construction site was celebrated with around 700 invited guests. Dr. Stefan Schulte, Chairman of the Executive Board of Fraport AG, Thomas Schäfer, Hessian Minister of Finance, and Dr. Christoph Mäckler, Terminal 3 architect, were present at this special milestone in the construction of Terminal 3. 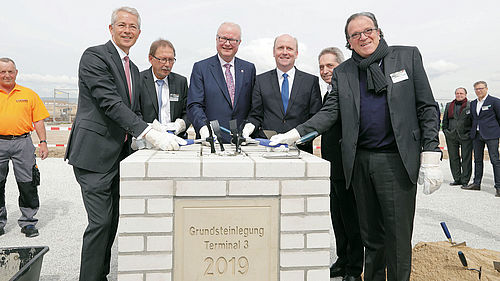 The ceremonial laying of the foundation stone officially marks the start of construction on Terminal 3. (April 2019) The hollow foundation stone now contains a time capsule, which was previously blessed by representatives of the three Abrahamic world religions Christianity, Islam and Judaism. In addition to current issues of important regional newspapers, a bottle of wine from Hessian cultivation and a list of all previous participants in the large-scale construction project, it also contains a hard disk on which project plans are stored. In this way, important testimonies to the construction of Terminal 3 will also be preserved for posterity!

"Frankfurt Airport is already an international leader in connectivity. From no other air traffic hub in the world can you reach more destinations than from Frankfurt - whether as a business traveller or a tourist. Germany's gateway to the world becomes even better with Terminal 3". (Dr. Stefan Schulte)

Tracks and Water pave the Way Tens of thousands of tons of gravel and sand are needed to produce the foundation, which is about one to two and a half meters thick. This is further processed into concrete in mixing plants next to the construction site. However, the necessary material is not only delivered by truck but also by train and ship. Only a few hundred meters from the construction site is a rail siding for Cargo City South. The cargo area to the south of the airport is connected to the Walldorf railway station over a four-kilometer stretch. Up to two trains full of sand and gravel per week are on the timetable during the concreting work. So far, 35 trains have already delivered 70,000 tons of material - and meanwhile saved around 2,600 truck trips! More than twice as much material for the concrete work arrived by sea. To be more precise: 65 shiploads have already arrived at the port in Frankfurt's Gutleutstraße and 60 more are to follow. This substitutes 5,600 truck journeys via the surrounding roads and freeways leading to the Terminal 3 construction site. A true relief for the surrounding road network!

For the construction of the main building, there are over 200 awarding units whose trades and work steps must be coordinated. Because: "If all the teeth and gears mesh perfectly like a clockwork, everything runs smoothly during construction," says Christian Bierend, overall project manager for the main terminal building. Building construction begins in numerous so-called white tubs. This is the name given to the concrete pits that were excavated in the groundwater during special foundation engineering. However, the underground levels are erected before construction is carried out beyond the edge of the tank. The construction of the terminal's main building also involves "building from bottom to top". The cellar is the first to be built. The new terminal’s subfloors are taking shape concurrently in six pits spanning a total area of 65,000 square meters. The shared two-and-a-half-meters-thick foundation slab is poured section by section, leaving a gap of around 60 centimeters from the surrounding pile walls. It constitutes the building’s structural base.

To create the bottommost level, the construction workers begin by inserting steel reinforcement bars (rebars) of an appropriate height in the slab sections. At the edge of the northern part of the building, underneath the future marketplace, two levels will eventually be chockful of 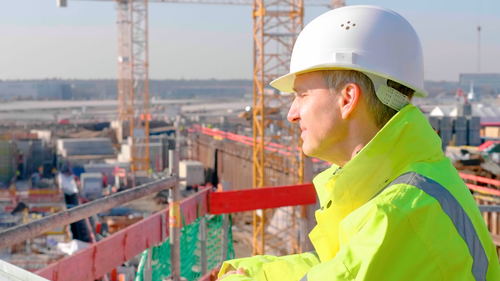 Christian Bierend, Overall Project Manager for the main building, puts the sizable construction project and its challenges into context. (February 2020) heating, ventilation and air conditioning (HVAC) systems. In the middle, plenty of room has to be left for the automated baggage conveyor system: here, instead of an intermediate floor there will be a single subfloor twice as high as the rest. As soon as the rebars are in place, the concrete is poured. A whole line of cement mixers is set up before starting; to ensure good-quality results, it’s important to completely pour each section in one go without a pause. Once the foundation is finished, work to make the walls begins. A small amount of space is left between them and the surrounding pile walls. 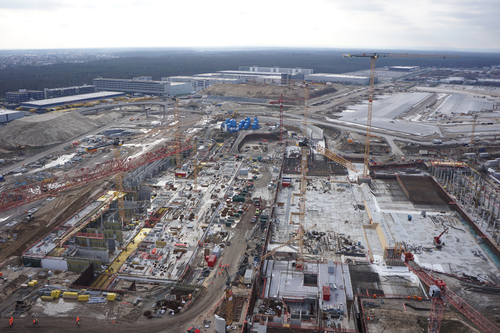 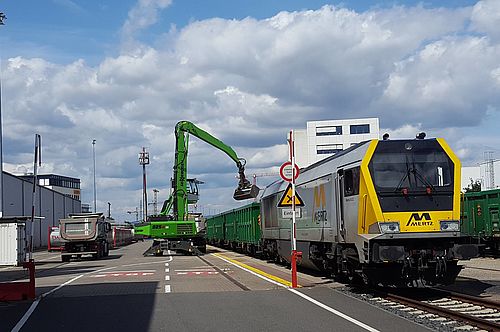 About 1,600 tons of sand and gravel per train will be delivered for concrete work on the main terminal building. 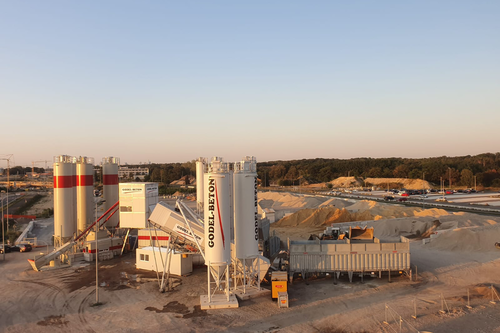 The up to 2.5 meter thick floor slab constructions will be erected piece by piece on a total of 65,000 square meters in the area of the main terminal building. 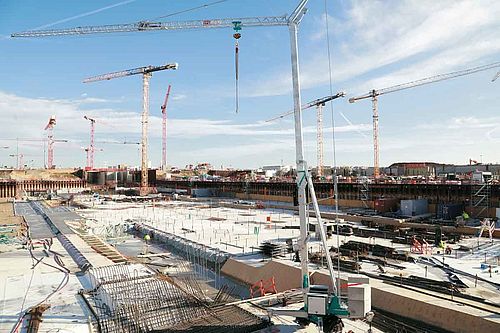 Not only "classical cranes" are present at the site of the future main building - mobile cranes are also rolling in the south of Frankfurt! 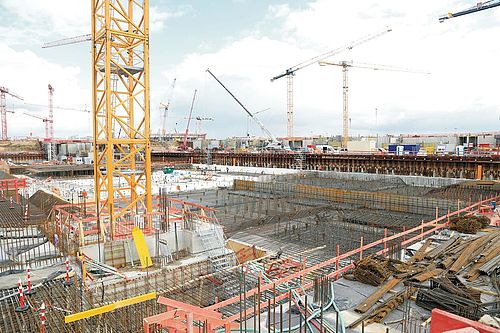 When all the walls of the lower level are up, the area between the walls and the sheet piling is filled. Accessible sheet piling can then be pulled and reused on other construction sites. 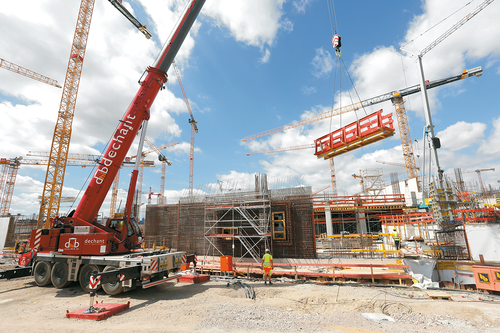 The construction cranes for the main building dominate the airport skyline. 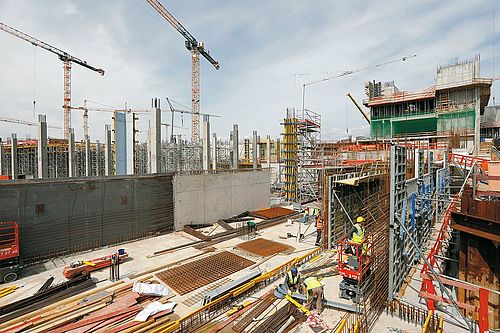 In the shadow of the apron control tower above, the main building is growing upwards bit by bit. After the walls are in place all the way around and the concrete has cured, the gaps between them and the pile walls are filled in with some of the earth, mixed with sand, that had been excavated while digging the pit. Construction workers then use vibratory plate compactors to tamp it dow

Not until all of a level’s walls are finished can the pile walls be pulled out of the ground. After spending up to two and a half years in the airport’s soil, they have finished their job and can be reused at other construction sites.

To finish a level, one more thing is naturally required: a ceiling. A thicket of special height-adjustable props, which pass through the rebars protruding from the walls, hold up the formwork. The concrete is then poured. After it has cured, the bare-bones level is done. An advantage for the construction company: shell construction is directly comparable with copy and paste on the computer! The individual steps are repeated for each successive level, which facilitates and speeds logistical planning.

This interactive graphic explains important steps involved in creating the shell of the main terminal building. Click on the numbers to learn more.

The plans call for the subfloors of the main terminal building to be ready for installation of the technical systems by the end of 2020. While work continues on the above-ground floors, the first technicians have their job cut out for them down below. All this is an exciting and very busy phase of one of Europe’s largest privately funded infrastructure projects, and there’s plenty more to come over the next couple of years!