On the Road to Terminal 3

How to Reach the New Terminal by Car, Taxi or Bus

Frankfurt Airport is the Rhine-Main Region’s gateway to the world: air travelers depart from here to nearly 300 destinations worldwide. Of course, an enjoyable departure includes not only a quick and easy check-in process, a pleasant ambiance and helpful employees, but also relaxed transportation to the airport. As long as Terminal 3 is under construction, it only needs to be accessed by heavy machinery and trucks. But after it opens, passengers and visitors will want to be able to get there easily and conveniently by car, bus or taxi. This makes it vital to intelligently link Terminal 3 to the existing road network.

On the New Roads 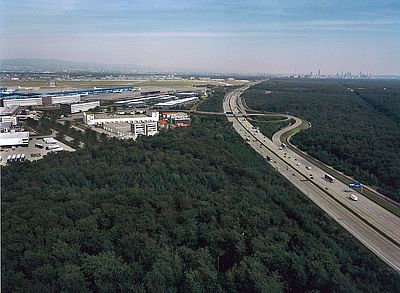 Looking to the future: The extended Zeppelinheim junction ensures fluid traffic. Terminal 3 will be connected to the existing transport network via the A5 motorway. To this end, the Zeppelinheim junction will be extended. The exit will be extended by another lane for traffic coming from the north and by a new access road for traffic leaving to the north. This will prevent traffic jams caused by arriving and departing traffic, even at peak times. The street scene is also changing parallel to the A5 motorway. This is where not only the route of the new PTS runs, but also another public road is built. It is connected to the Hugo-Eckener-Ring and the Gateway Gardens via a roundabout in the north. The internally used Ellis Road continues past the Luftbrückendenkmal and will only be slightly moved inwards in the course of the road development. A parking guidance system will also be set up to ensure a smooth journey, providing orientation for arrivals and showing them the shortest route to the nearest free parking space.

The animated graphic shows how traffic will flow via the roads to and from Terminal 3 in the future.

And there are plenty of them at Terminal 3: thanks to a new car park, 8,500 parking spaces will be available on eight storeys from 2023. This also includes special parking spaces for electric vehicles. The new car park will be split into two buildings: The northern part will be 400 meters long which is about twice the length of the southern section. Footbridges will connect them seamlessley.  As the up to 26 meter high multi-storey car park is being built directly opposite the new main building, the distance from the parking space to the check-in area is short. A new bus station with 27 stops will provide a seamless connection to the region; in addition, taxis will be able to park around 45 cars directly on the terminal access road. Particularly exciting for visitors: 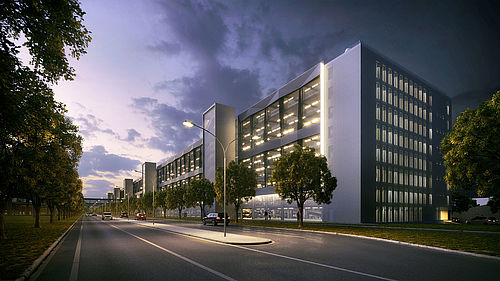 The new and modern multi-storey car park in the immediate vicinity of Terminal 3 also offers charging facilities for electric vehicles among the 8,500 parking spaces. Source: Obermeyer Planen + Beraten GmbH the terminal will be connected to national cycle paths. Close to Terminal 3, 100 bicycle parking spaces will be created below the PTS station. 30 of these will be equipped with charging stations for e-bikes.

Those who reach Terminal 3 by car and get off at the 15,300 square meter drive-by platform will be able to board without stairs or lifts, as the drive-by area of the terminal is on the same level as the gates of Piers H and J. An access ramp and a departure ramp are therefore required for the road connection of the drive-by platform on the departure level with a bridge area of approx. 15,300 square meters. In future, the 256 meter long access ramp will lead to the check-in area of Terminal 3. The departing traffic, in turn, will be led via the 11 meter high and 136 meter long departure ramp to the roads below. 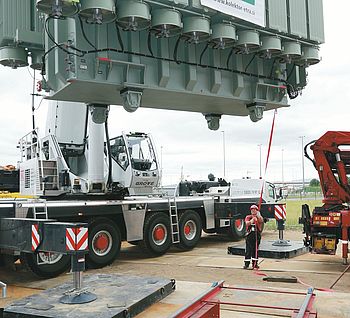 The transformer impresses with a length of about eight meters, almost six meters in height and more than four meters of width. Infrastructure, Second Take: The Tension Rises Aside from the transport infrastructure, the new Terminal 3 also requires an extended power supply. With two independent electricity grid operators, 60 emergency generators and 30 employees, Frankfurt Airport is well-prepared at the moment. To also cover the needs of CargoCity South and Terminal 3 in the future, the capacity of the power grid will be expanded considerably. A glimpse into the expansion: In June 2018, this transformer was delivered to Frankfurt Airport. Its impressive weight of 78 tonnes called for the help of a heavy-duty crane and specially constructed tracks. The colossus would be able to provide a city of 30,000 inhabitants with their needed amount of power. At Frankfurt Airport, the transformer lowers the electricity from 110 kV in high voltage to a medium voltage of 10 kV via the transformer station Airport North. From 2019 on, the plant will provide sufficient power for the Terminal 3 construction site and thus support the smooth progressing of the construction work.

The Road Network Is Growing

To optimally prepare the roads in the south of Frankfurt Airport for the new terminal, the existing road network will be gradually renewed and expanded: A total of 10,000 meters of road will be added. 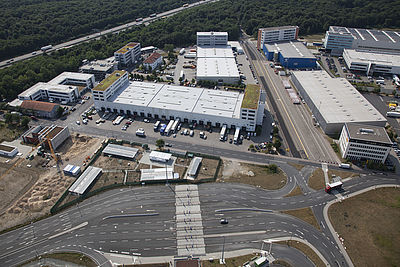 The interactive graphic shows the road links for Terminal 3 taking shape over time. Move the pointer to see how the construction site changes up until completion in 2023.

60 Tonnes of Steel – a Job for Powerful Cranes 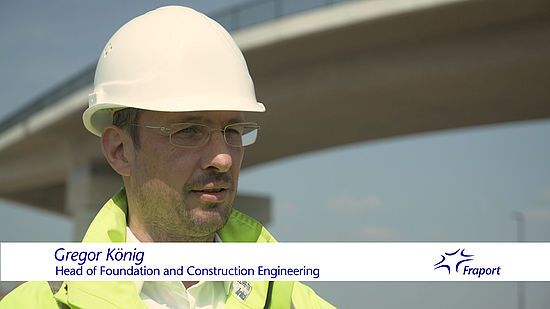 Gregor König, Head of Foundation and Construction Engineering, explains the extensive construction measures for the road connection in the video. (April 2019) After the completion of the new Gate 32, the next important sub-projects for the road connection began in June 2016: the access and exit ramps. In future, travellers and visitors will be able to reach the departure level of Terminal 3 directly via these ramps.

As a first step in ramp construction, stable foundations will be erected as part of the foundation work. To this end, 120 bored piles will be sunk into the ground. The individual bored piles have a diameter of 1.20 metres and an impressive length of up to 18 metres. They transfer the loads from the ramp to the ground via the supporting piers. For the construction of the piers standing on the foundation, steel cages weighing up to 4.5 tons and 9 meters long, so-called reinforcement cages, are pre-braided and welded and lifted onto the individual foundations of the ramps with a truck-mounted crane. After the reinforcement cages have been surrounded with a column formwork, concrete can be filled in. Once it has dried, the supporting columns form the basis for the work on the superstructure with the actual road as load-bearing elements. 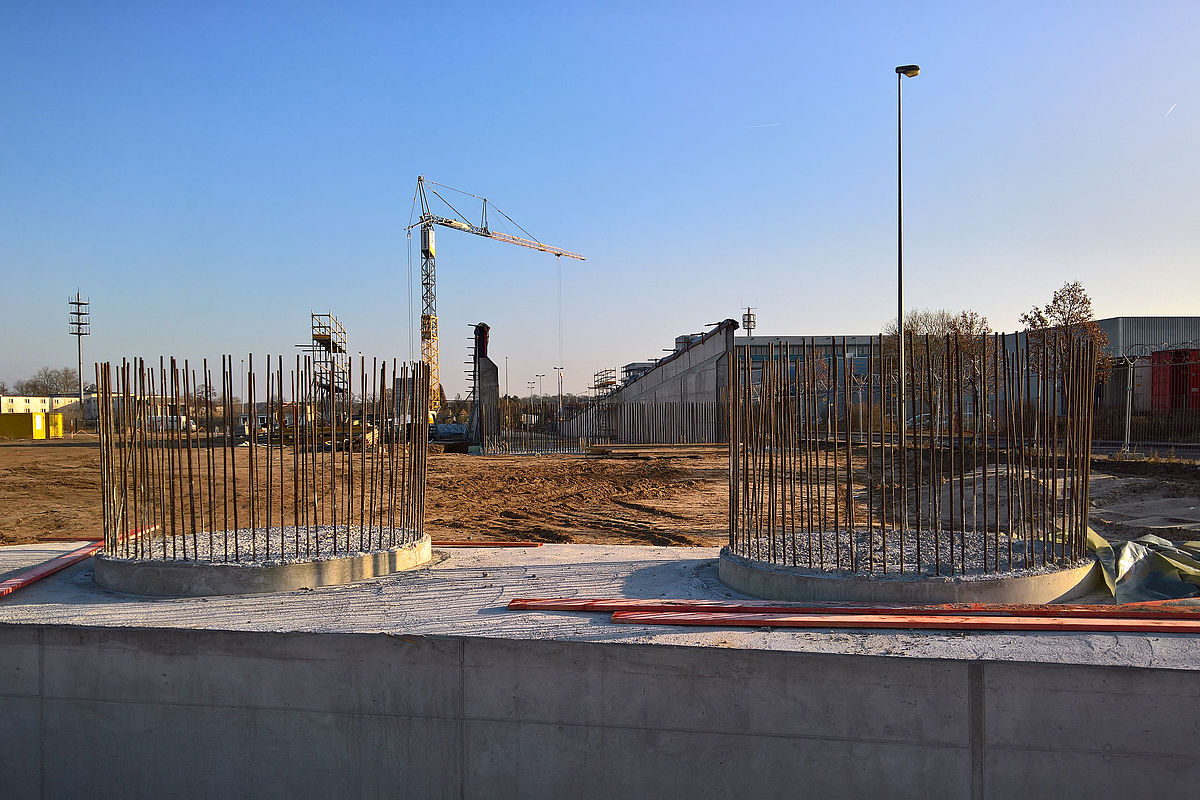 The access ramp is built on nine foundations and the exit ramp on six. 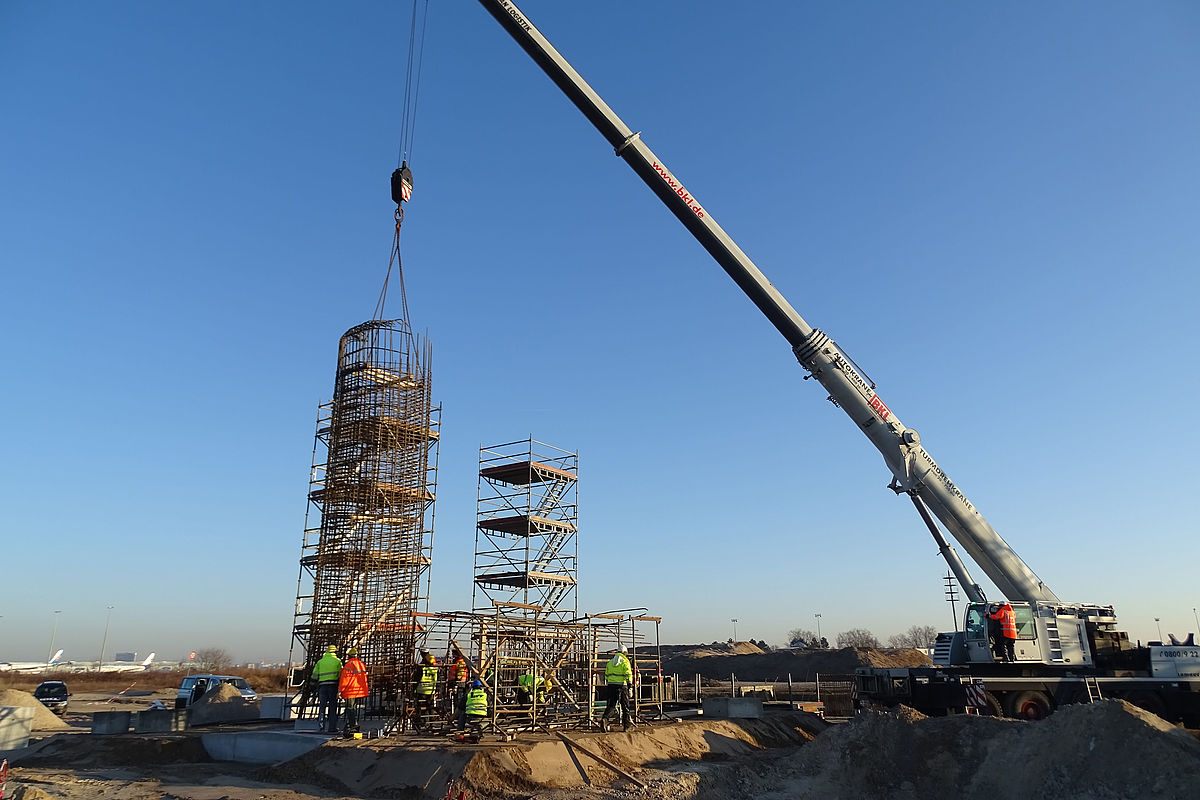 Each rebar cage for the supporting columns is nine meters long and weighs 4.5 tonnes 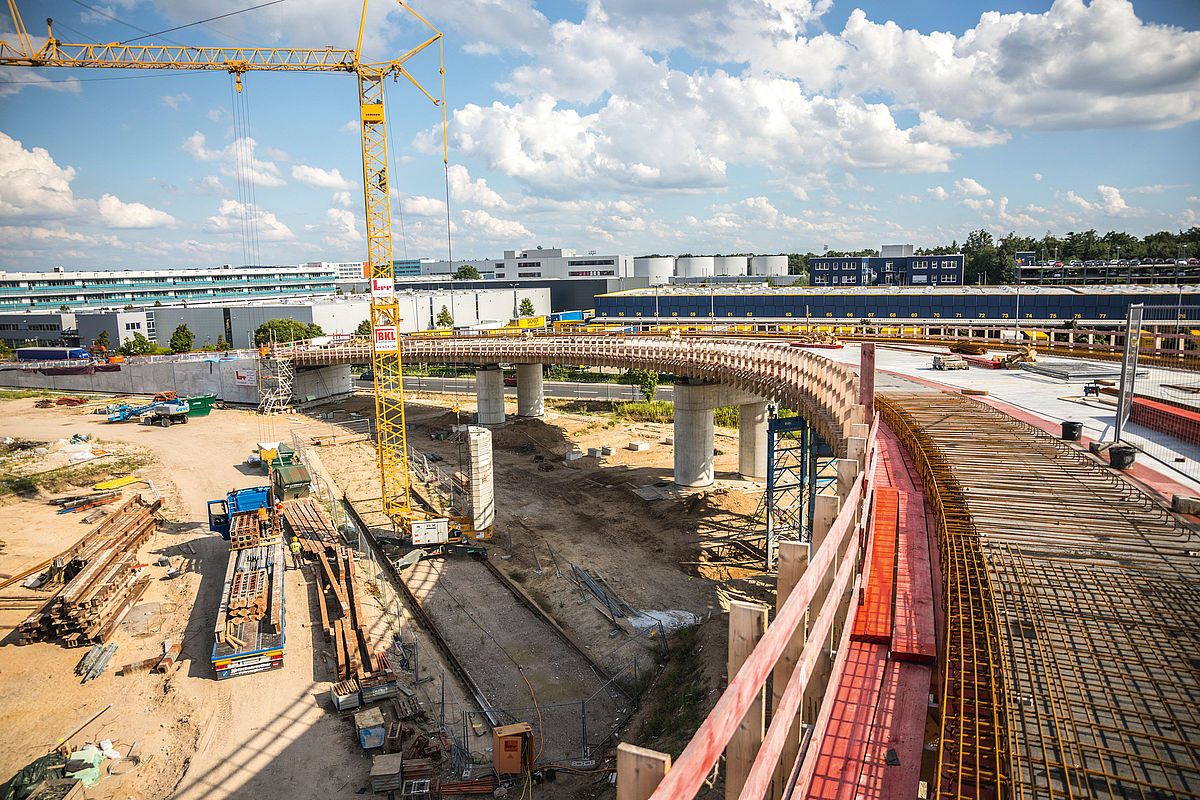 The ramps will let passengers easily get to and leave the departure level of Terminal 3 by car, taxi or bus. 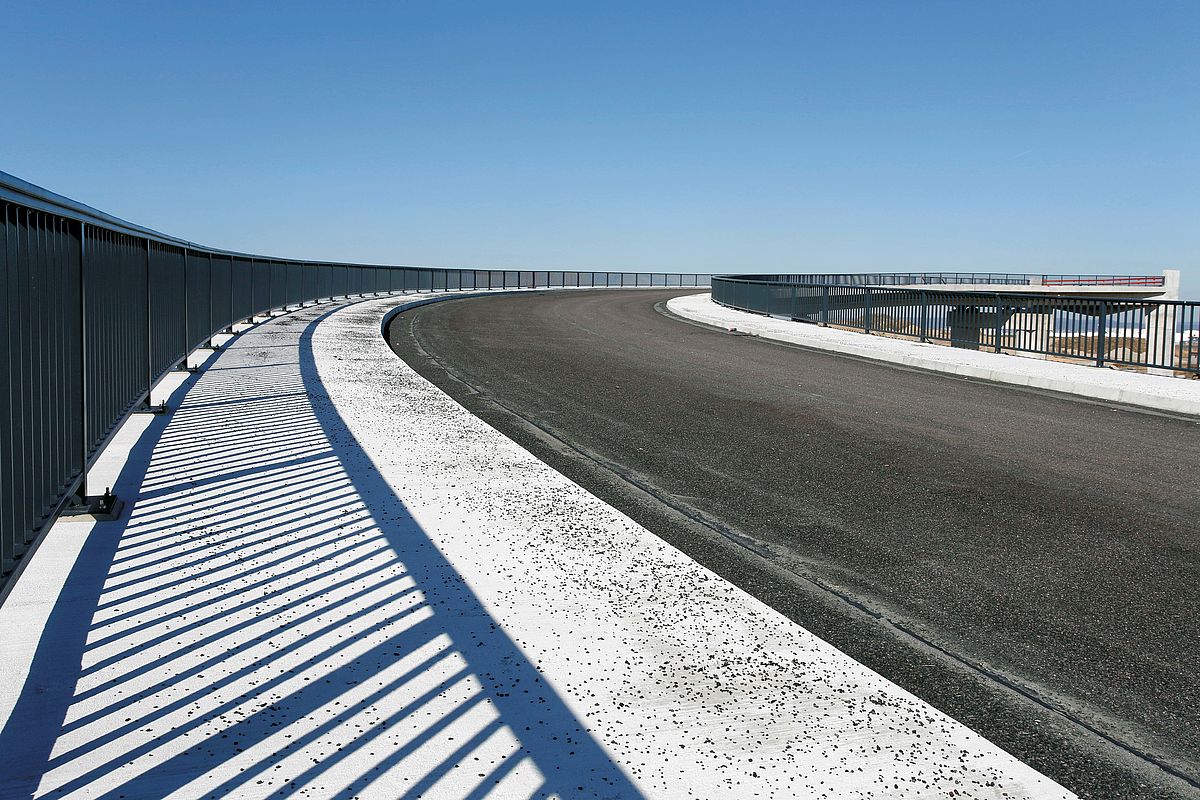 In a final step, the top of the exit ramp was paved and the rails were installed. 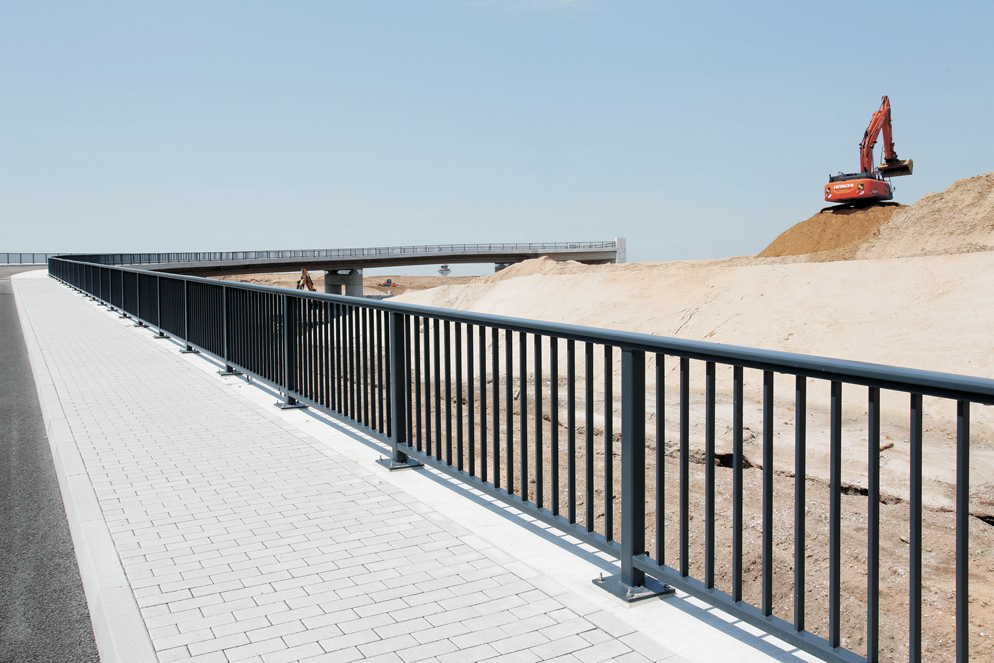 The exit ramp was finalized in the first quarter of 2018. 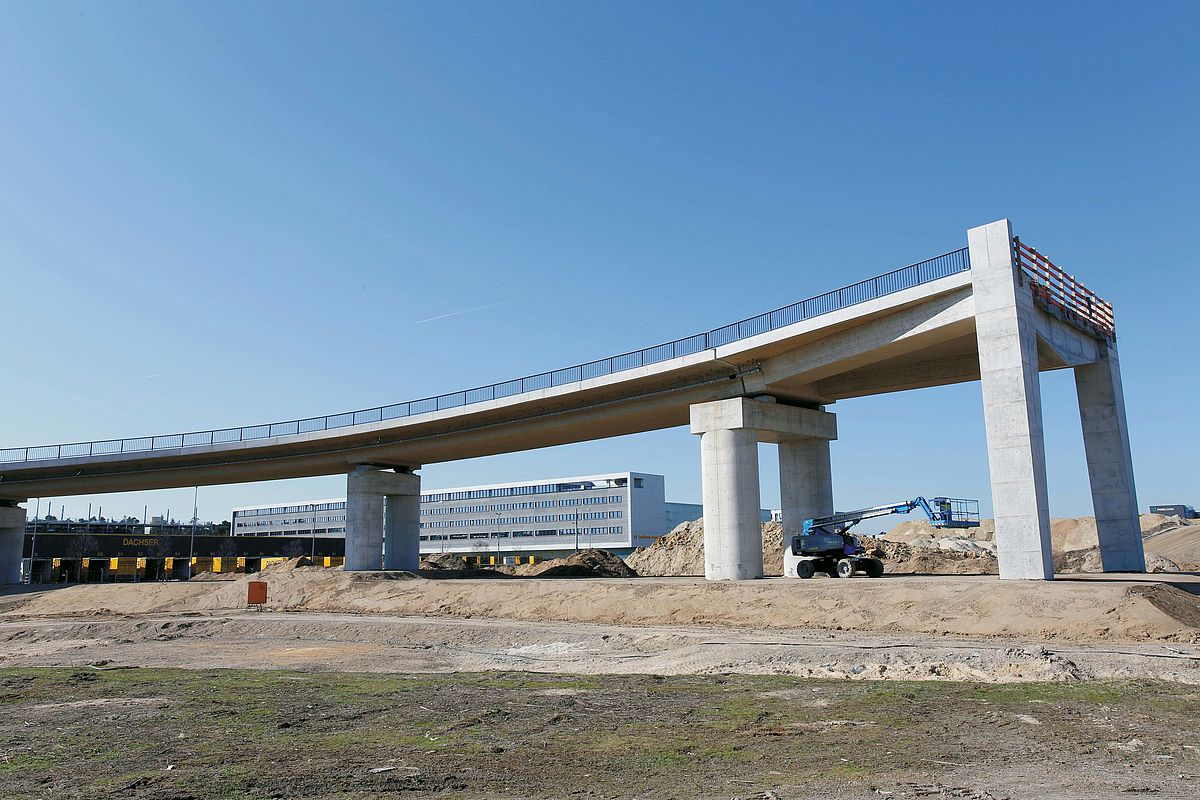 The exit ramp was completed at the end of the first quarter of 2018. 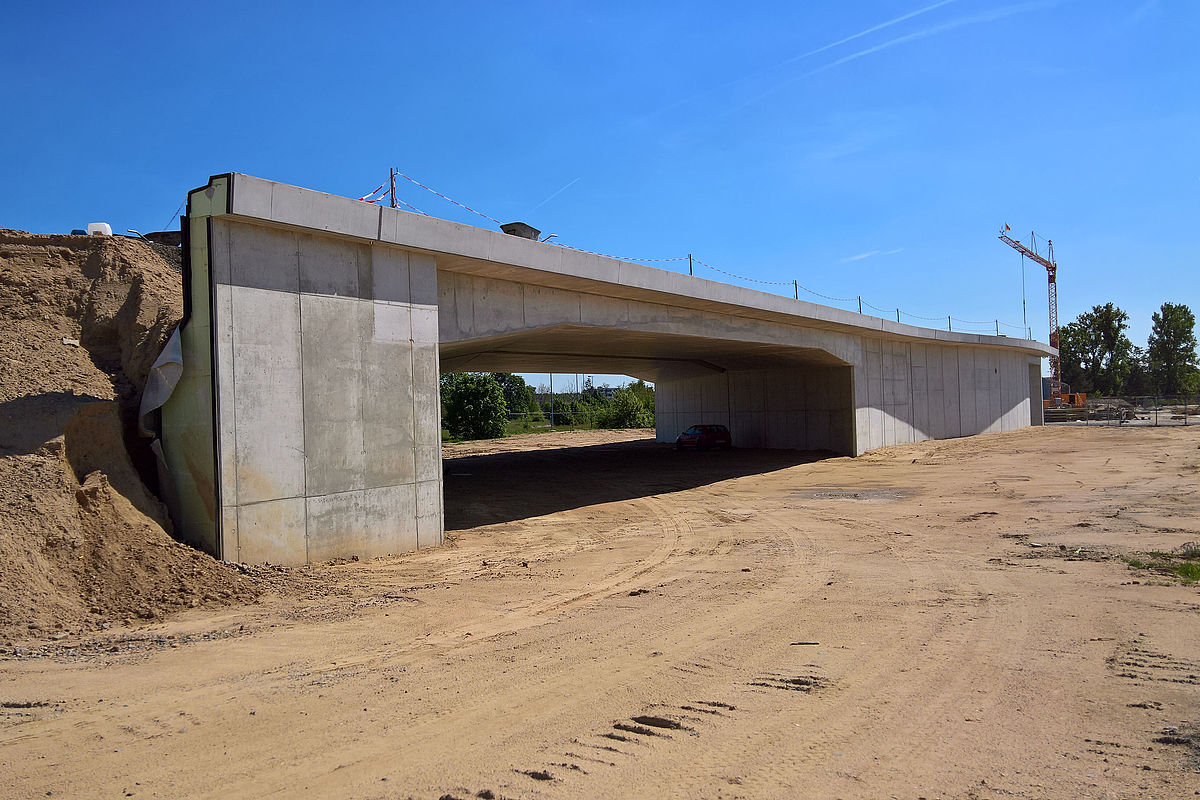 The first bridge of the future access road to Terminal 3 near the InterCity Hotel, just before completion. 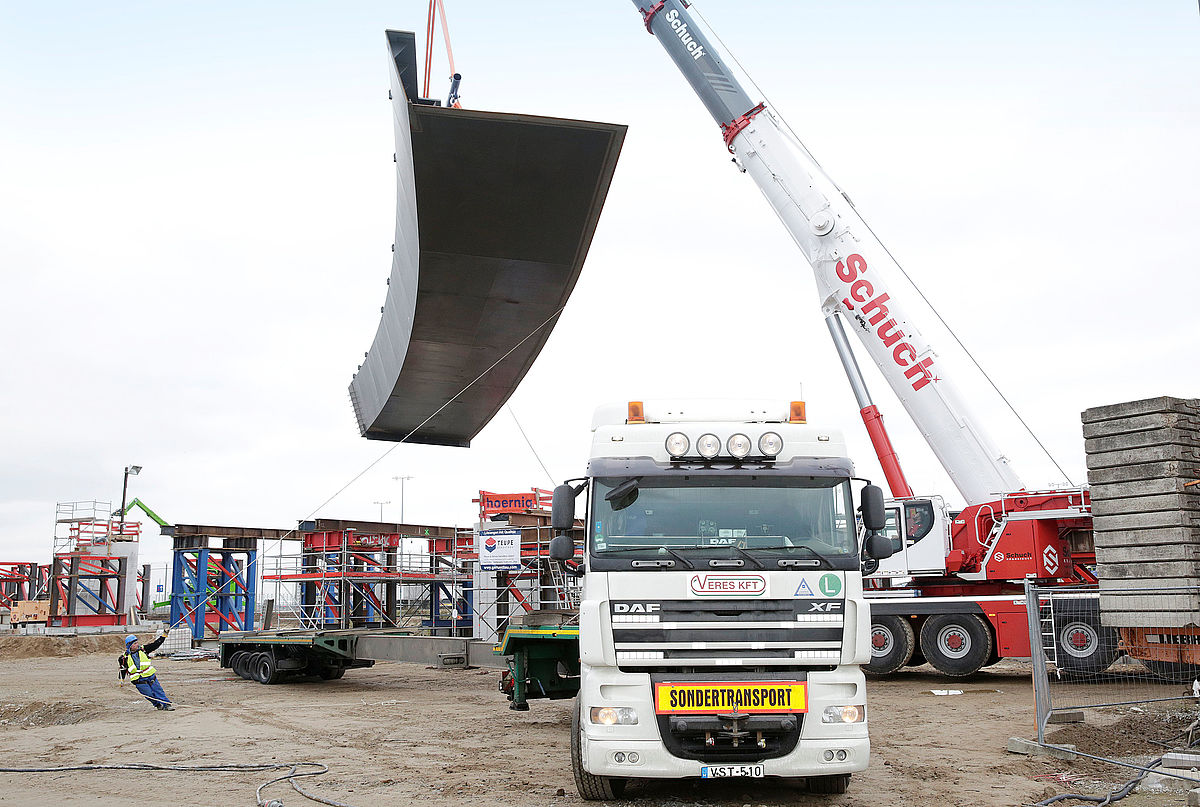 Truck-mounted cranes are the only way to lift the sections onto the ramp’s supporting structure. 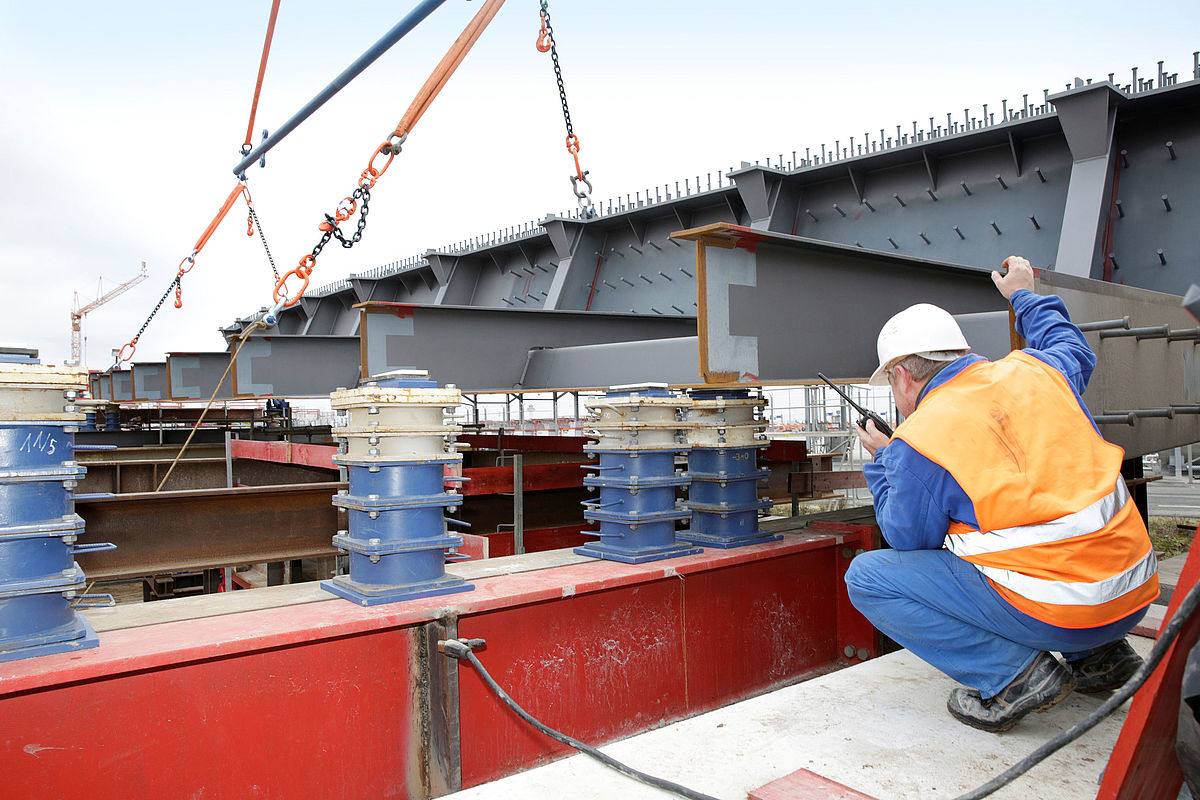 The sections are precisely lowered into place and then welded together. 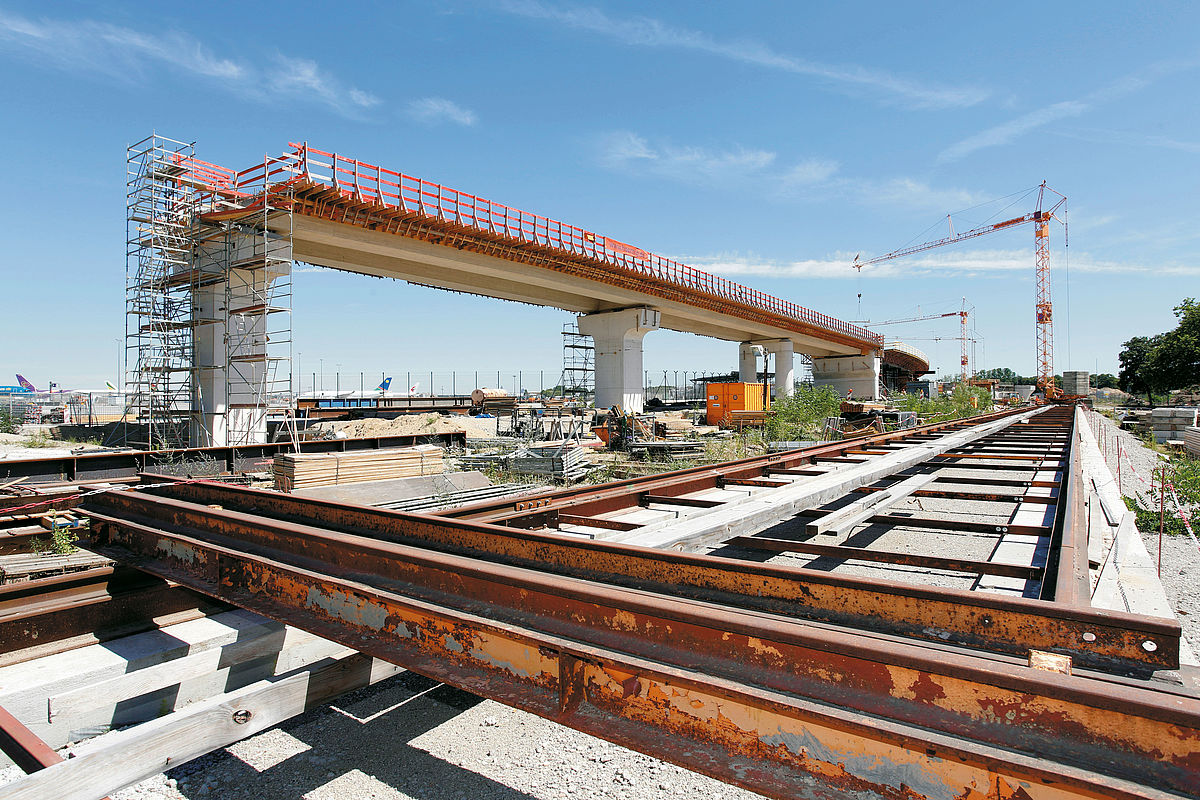 After successfully mounting the steel parts, about 900 cubic meters of concrete were poured in for the arrival ramp.

The first roads leading to the main terminal building have already been asphalted. 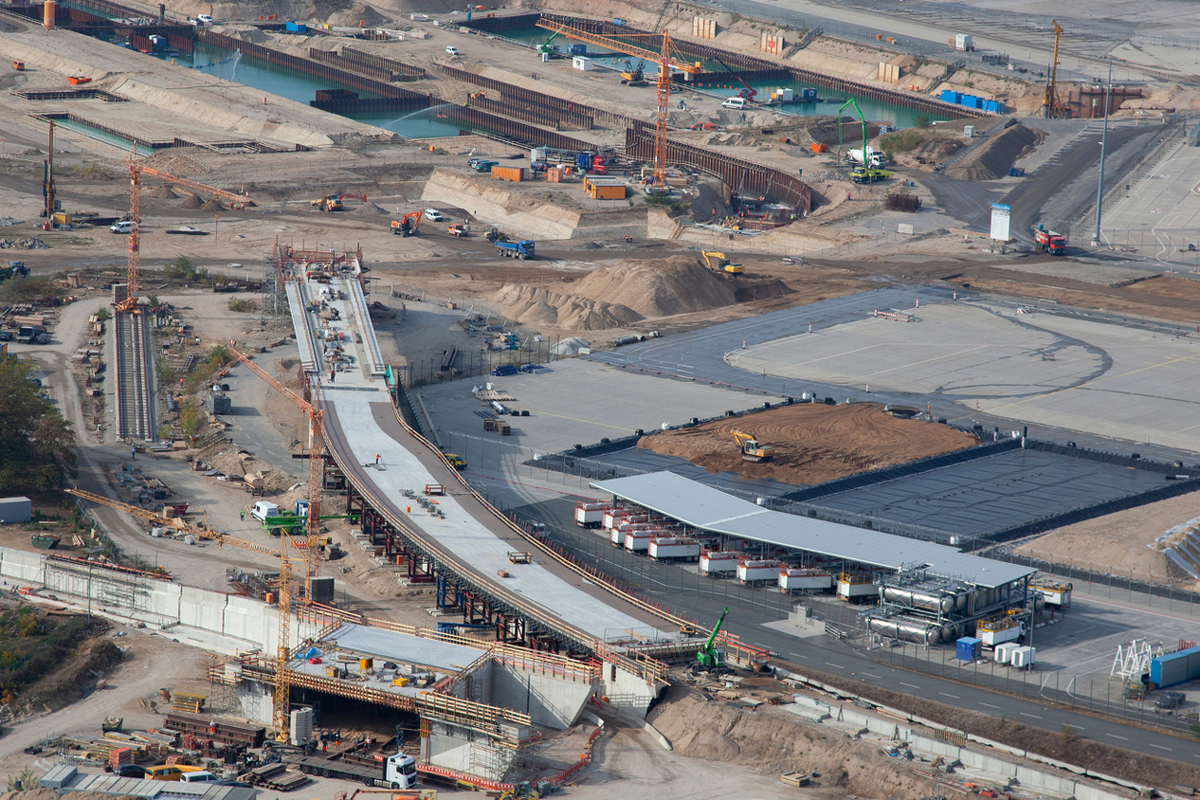 Thanks to the 256 meter long arrival ramp, passengers will be able to easily get to Terminal 3 via car, taxi or bus. 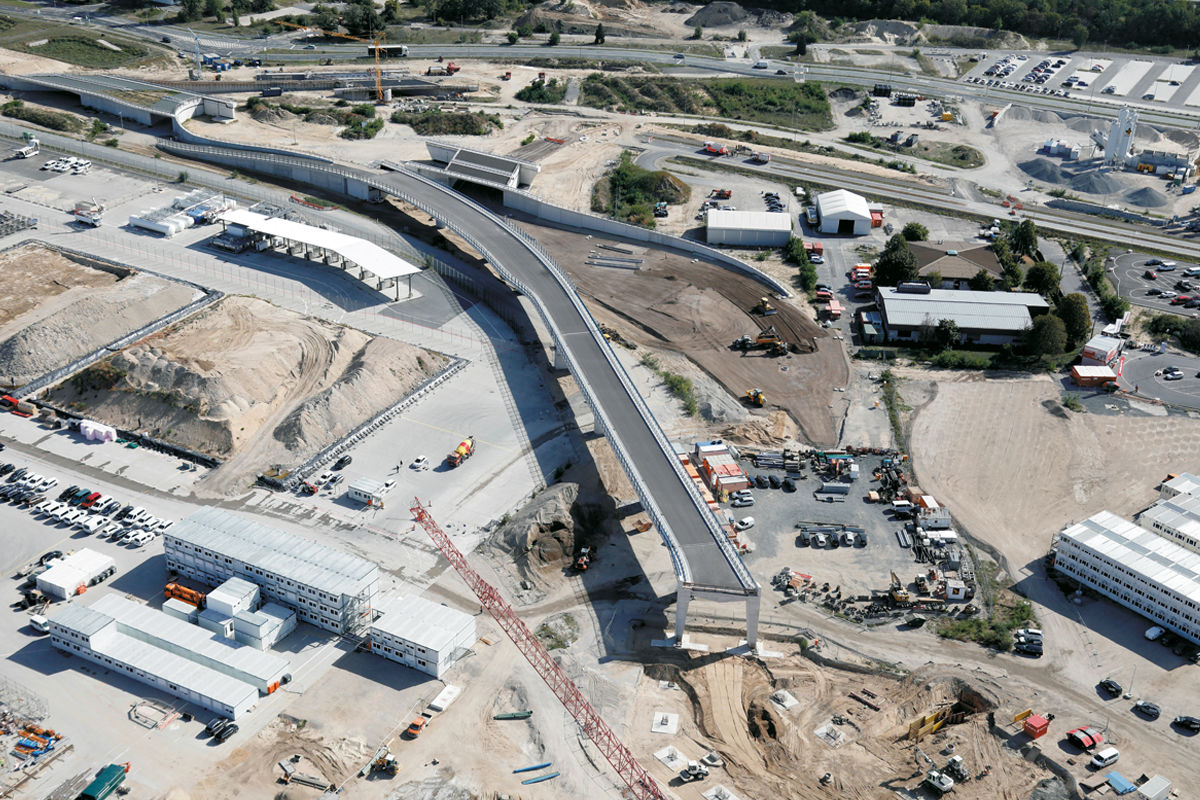 The arrival ramp was completed in mid-2019.

The arrival ramp is a composite steel-and-concrete construction: a trough consisting of massive steel elements holds and is connected to a reinforced concrete deck for added stability. This is essential for ensuring the required structural strength of the overall bridge with its complex geometry. The access road, a service road and the new people mover line run beneath the ramp.

Each of the steel sections for the trough of the arrival ramp is 29 meters long and four meters wide and weighs up to 42 tonnes: as much as seven full-grown elephants. Before they were delivered in December 2017, a supporting structure was installed on the foundations. Then the sections were precisely lifted into place on the structure. This called for heavy equipment. Sparks flew as the sections were jockeyed into position. They were then welded together at high temperatures of several thousand degrees Celsius.

Additional modules will be delivered until the spring of 2018, with some of them weighing even more (up to 60 tonnes). As soon as the steel trough with a total length of 140 meters is finished, concreting will begin.

In the final step, the road is asphalted and the railings and crash barriers are installed. At the same time, construction work on the roads leading to the new Gate 32 is progressing: the first road sections were completed here in 2019.
The access and departure ramps still offer an impressive view of the runways and the airport. In the near future, the new Terminal 3 in particular will be on display here.

In this aerial shot, the progress of the construction work on the drive-by platform table is clearly visible.

The support pillars of the drive-by platform are slowly taking shape; 70 of them will carry the structure in the future.

On the Challenge of Building Bridges

The visualization shows the future drive-by platform table at Terminal 3. Source: Fraport AG / © Christoph Mäckler Architekten While all new bridge structures for the roads around Terminal 3 were completed by the end of 2019, construction of the drive-by platform is still in full swing! The next construction project connects the two ramps: the approx. 550 meter long and 30 meter wide drive-by platform. At a height of around ten meters and a total bridge area of 15,300 square meters, cars and taxis will then be able to drive directly up to the check-in hall. A bridge structure of this size needs a stable foundation. At first, the load-bearing piles were anchored in the ground in mid-2019. Construction equipment, with an impressive weight of up to 155 tons, drilled 13 meters deep into the ground. A true challenge for the workers on site who have to operate the

Christopher Diefenhardt (Max Bögl Group), responsible for the drive-by platform, explains the construction process of the bridging structure in this video. (August 2019) enormous machines, all while adjusting them continuously with high precision. The pile head plates, which ultimately form the base for the suppor pillars of the drive-by platform, are then placed on the piles. 70 of them will carry the bridge structure in the future; 56 of which will be built on a straight line from east to west. However, they will not only hold the road above, but will also provide space for pipes, for example for waste water. These will be placed inside the columns. The characteristic V-shape of the columns requires special attention by the engineers, as Christopher Diefenhardt from Max Bögl Group explains in the video clip.

The bridge structures for the road development are in place: Now the dots have to be connected! (February 2020) In addition to the large structures and ramps, the roads leading to and from Terminal 3 are also taking shape. The 10,000 meter long road network will connect the new terminal with the motorway, CargoCity South and the operating area. In 2020, construction work on the new Zeppelinheim section of the terminal will also be progressing rapidly.