Taking the Second Step Before the First

You can’t take the second step before the first―or can you? The answer is: yes! At Frankfurt Airport, at least. Namely by advancing the construction of Pier G before the main building of Terminal 3 has been completed. It takes a long time to plan an infrastructure project of this magnitude. The first talks with the city of Frankfurt were held back in 1997. The new terminal was therefore very flexibly designed from the outset so that it could be easily adjusted later to accommodate changing 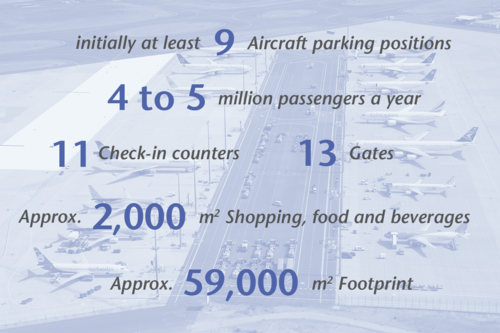 conditions.Change and motion are integral parts of such a dynamic, vibrant place as Germany’s largest air travel hub. The passenger numbers show that clearly. The trend continues skyward. More and more people are departing from―or transferring at―Frankfurt to travel to places worldwide. There are direct connections from here to destinations in up to 130 other countries. Of course, more passengers mean a heavier load on the existing facilities, i.e. Terminals 1 and 2. At peak times, it is no longer possible to completely meet all of travelers’ expectations with regard to comfort and convenience. 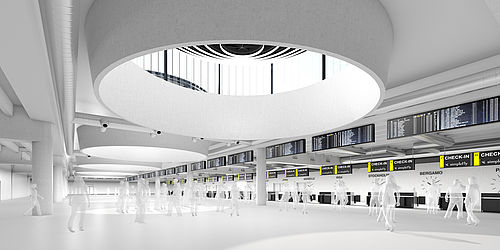 A functional, modern design and efficient processes will ensure a relaxed experience for passengers. Source: Fraport AG / © Christoph Mäckler Architekten This calls for an innovative solution. In 2021, Pier G will be completed - two years ahead of the main building of Terminal 3. Then, some of the load can be shifted to it from Terminals 1 and 2. It will initially have capacity for between four and five million passengers a year, which can later be increased to six or seven million once Terminal 3 is fully completed.

“In response to surging passenger volumes, we are going to give priority to implementing Pier G, which had originally been planned as the second phase of constructing Terminal 3. The new pier will be built as a fully functional passenger handling facility and optimally integrated in Frankfurt Airport.” Dr. Stefan Schulte, Chairman of the Executive Board of Fraport AG

The area that will be occupied by Pier G has already been used for parking aircraft since 2012. It’s therefore easy to imagine passengers leaving from here to destinations worldwide or arriving in Frankfurt. Even though Pier G is completed ahead of time, all parts of the terminal will be cast in one mold and follow the vision of Terminal 3’s architect, Christoph Mäckler. Just like the main building, Pier G will also be modern and appealing. At the same time, the new pier is designed for lean and uncomplicated processes. Passengers benefit from direct routes from check-in via security checks to boarding as well as clear guidance throughout the entire gate.

This also means full flexibility: No matter whether you are travelling within Europe or far away, from Pier G, flights are possible both in the Schengen area and to intercontinental destinations in the non-Schengen area. Travelers experience a stress-free and pleasant "Gute Reise" amidst straightforward functionality and modern design.

First Alone, Then Part of a Whole

When airport operations begin at Pier G, work on Piers H and J and the main terminal building will continue right alongside it. Some connections to the northern part of the airport, including the planned link to the automated baggage handling system and the people mover, won’t be available for use until Terminal 3 is inaugurated. It is especially important to consistently ensure smooth transfer of transit passengers and their luggage between planes. Pier G will therefore be integrated in the airport’s important hub functions from the start. For the time being, shuttle buses spaced just a few minutes apart will circulate directly between the terminals in the north and Pier G. Suitcases, board trolleys and so on will be moved via the apron.

After its completion, Pier G will initially be connected to Terminals 1 and 2 via bus shuttle.

The Mega Project Is Stitched Together 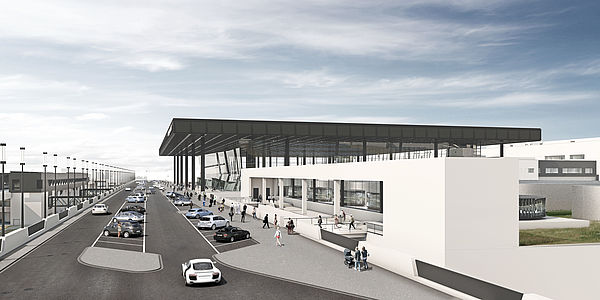 After the completion of the first construction phase, Pier G will be accessible not only via car and taxi but also via the new people mover. Source: Fraport AG / © Christoph Mäckler Architekten Pier G is the first milestone for bringing the future vision of Terminal 3 into the present. When the new terminal officially opens, it will comprise the main building and Piers G, H and J, thus also concluding the first construction phase. Frankfurt Airport is getting ready to handle the growing numbers of passengers by concurrently planning and implementing the first and second phases.

Speedy Gonzales at the Construction Site

While work on the first construction phase of Terminal 3 was already in full swing in December 2018, initial preparations 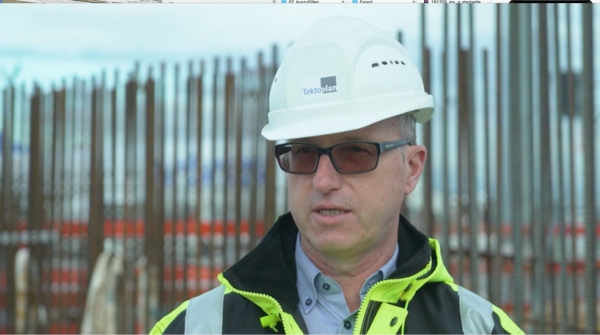 Project Manager Frank Schütz (tektoplan/FAS GmbH) explains the immaculate timing for the construction of Pier G (2019). also began on the neighboring construction site of Pier G. Apron areas were demolished, stabilizing walls were installed and earth excavated. The first supply lines for the necessary infrastructure were also laid. In June 2019, the "ready, set, go" was given to start the construction! The goal is to complete Pier G by the 2021 winter flight schedule. This means that the participating construction companies and their employees are about to sprint on a marathon route. They have to plan efficiently and carry out the upcoming construction steps both quickly and precisely. Everything must work together perfectly so that the finish line is reached on time.

In order to meet these tight schedules, prefabricated constructions are used. They are cast in concrete beforehand and delivered to the construction site ready for use. This allows for much faster construction progress than producing all elements on site. Columns, slabs and beams that serve to increase the load-bearing capacity of e Pier G’s ceilings are installed as finished parts. A large chain crane is used for this process. In this way, the shell of the basement keeps growing into ever higher spheres – and finally forms the first floor. Where the basement is finished, installment of technical building services can begin. At the same time, work is being carried out on the second floor of Pier G. 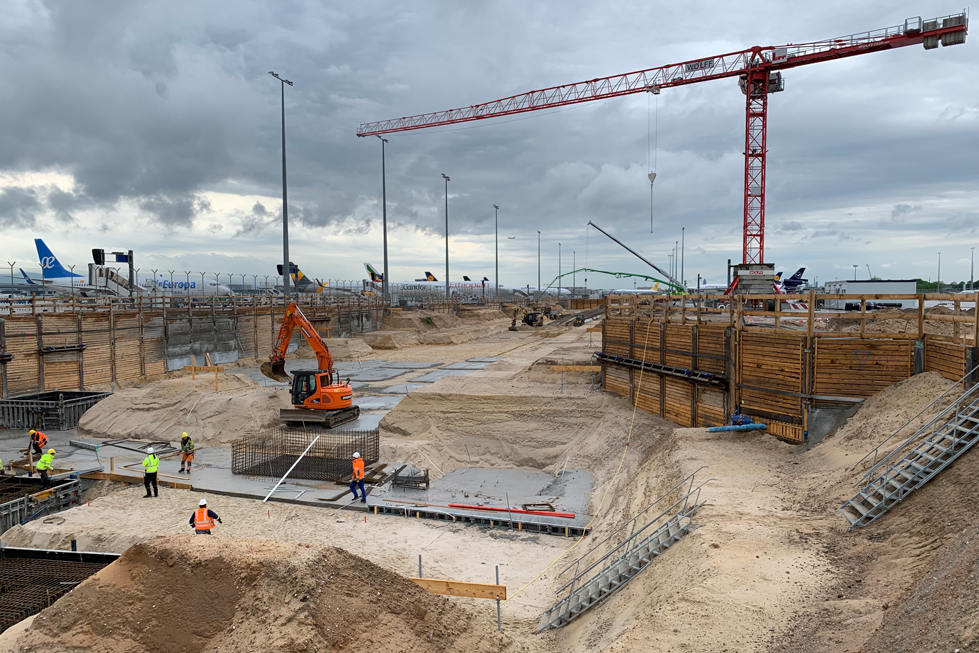 The construction of Pier G has begun in June 2019. 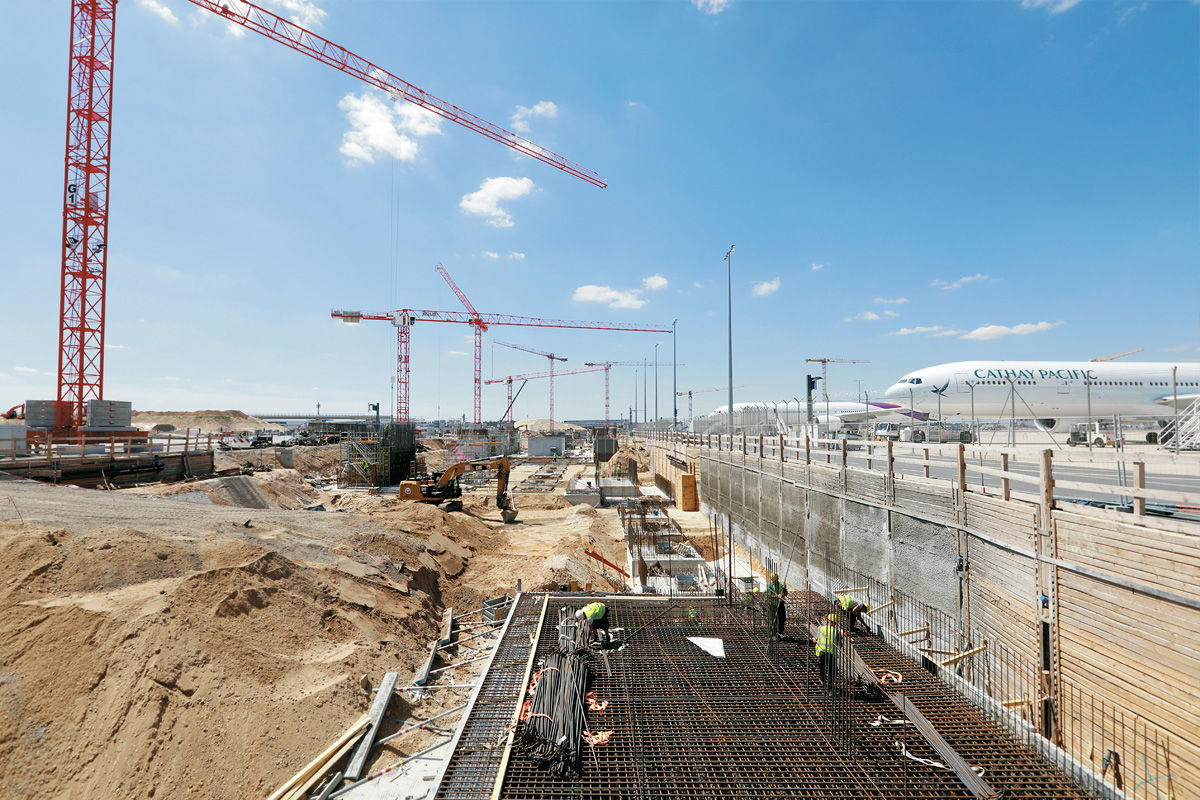 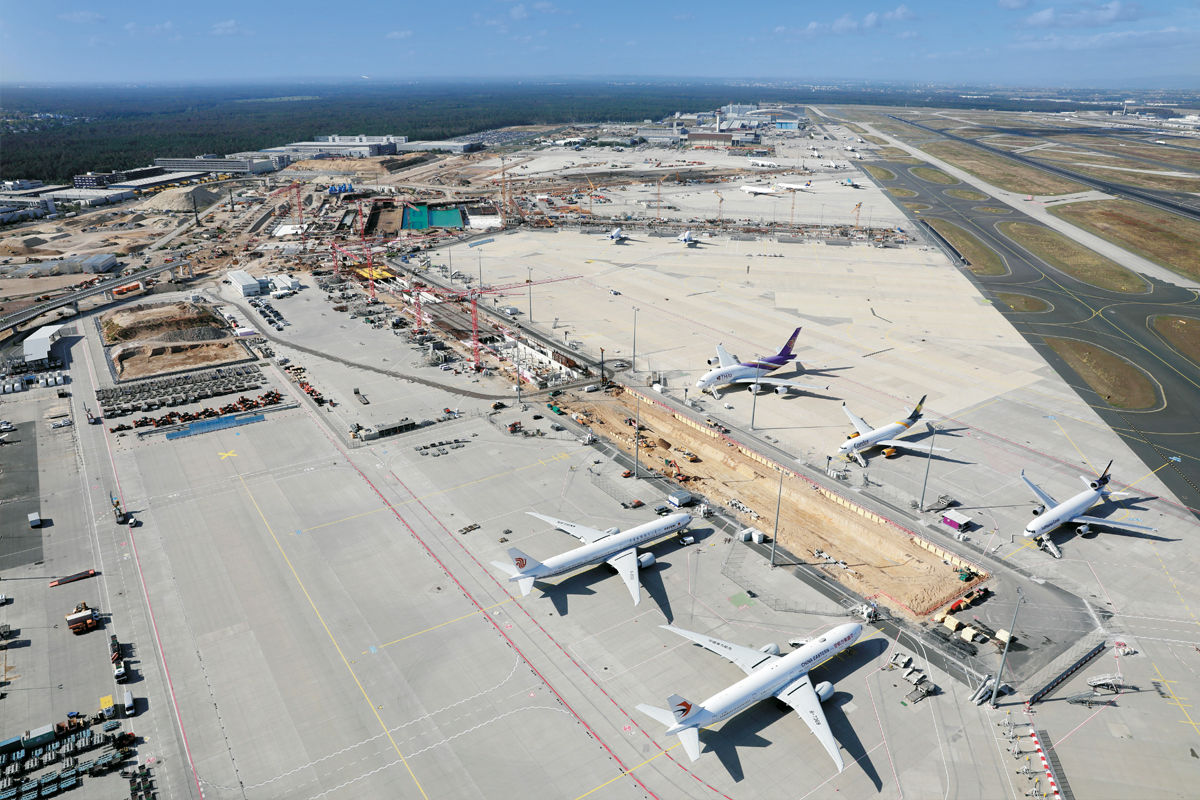 The fact that Pier G will be built in multiple phases can be seen clearly from the air: Concrete structures are already standing in the front area, while the sand at the rear shows that construction in this area has just begun. 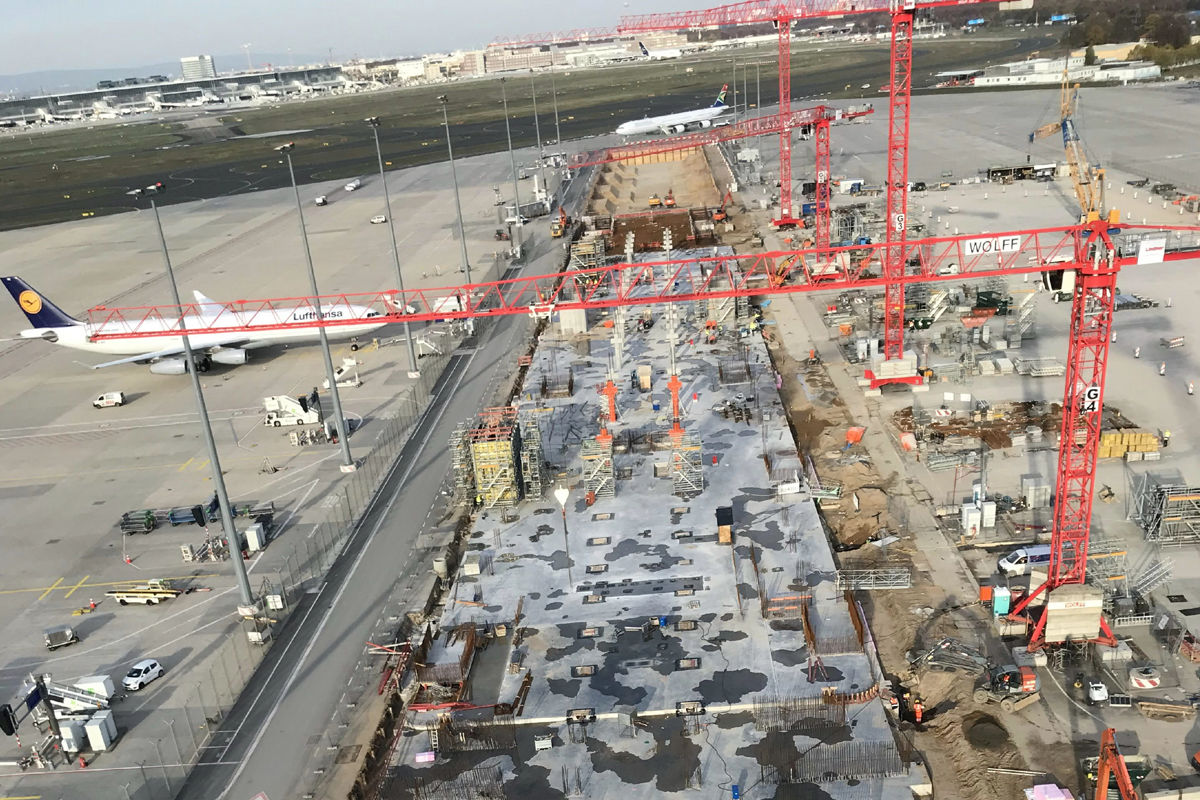 Pier G comprises three levels. The shell construction of the basement has almost been completed. 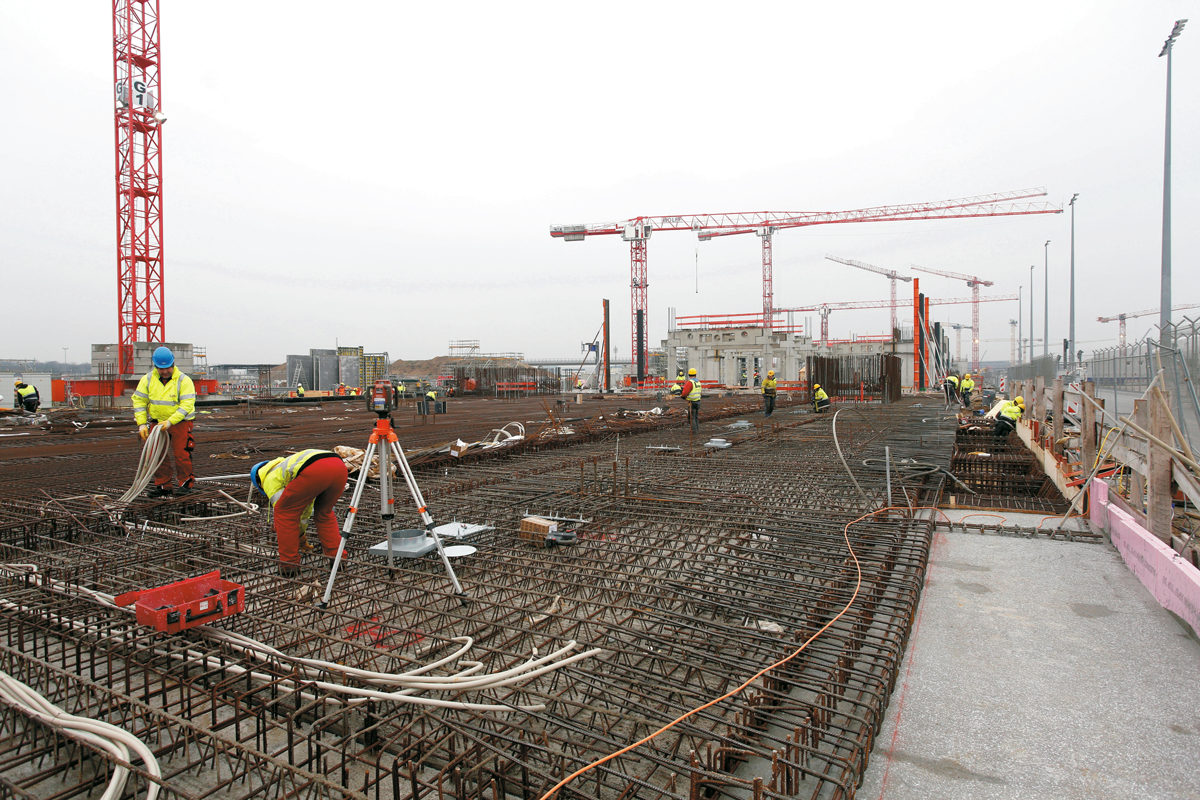 While in the front the reinforcements are still being worked on, in the background several load-bearing precast structures are already in place. 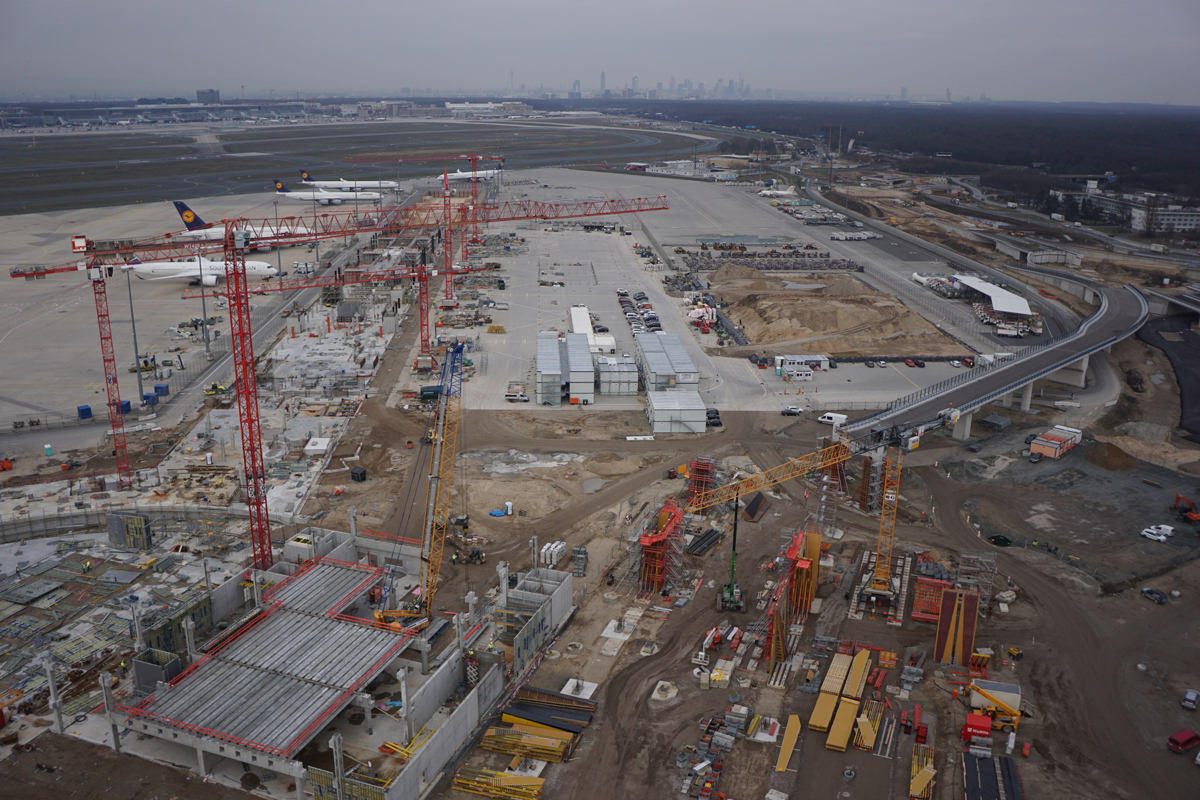 The contours of the head building of Pier G are also becoming increasingly prominent. In the future, passengers will be able to check in and drop off their baggage there.