From Terminal to Terminal

Machines and construction workers are busily digging and building in the south of Frankfurt Airport to create the new terminal, which is scheduled to open in 2023. But how will passengers, visitors and employees get from there to Terminals 1 and 2 and back? After all, two runways separate it from the rest of the airport. Wolfgang Holzhausen and other planners have been racking their brains for years to solve this puzzle. “I started developing ideas for the infrastructure at the airport back when I was still an engineering student at Darmstadt Technical University, and since going to work for Fraport I’ve been fleshing out a solution that I originally presented in a term paper,” says the transportation expert. 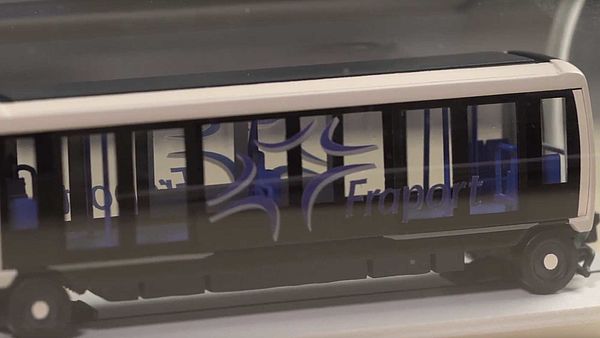 Wolfgang Holzhausen explains in the video where the new People Mover is being built. (December 2018) Now he is responsible for planning and implementing a new people mover system that will let passengers transfer smoothly and quickly between Terminal 3 and the two existing terminals as well as the regional and long-distance train stations.

When Terminal 2 was inaugurated back in 1994, its planners faced a similar challenge. To master it, they developed a completely autonomous, driverless transportation system called the Sky Line that ever since has been shuttling passengers between Terminals 1 and 2 without a break. And it continues to do its job reliably today. Initially the possibility of extending the Sky Line route all the way to Terminal 3 in the south of the airport was considered. Unfortunately, however, it is designed primarily for transit passengers, 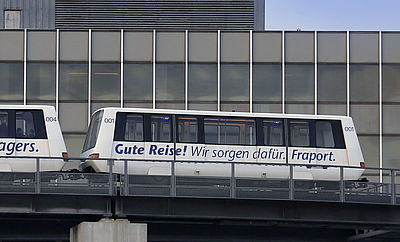 The Sky Line has been running between Terminals 1 and 2 since 1994, when it became Germany’s first driverless transportation system. and the trains are limited to two cars each. It therefore wouldn’t be possible for other travelers to ride it to Terminal 3 without creating bottlenecks.

Instead, Holzhausen and his team have designed a parallel transportation system with separate tracks. Passengers arriving by rail can conveniently board it at a new station behind

The new people mover will optimally link the new terminal to the existing airport facilities. Terminal 1. Until the expansion of station C is realized, it will be possible to change between the “old” and “new” people movers at the Terminal 2 station, which was conveniently prepared to permit the addition of two more tracks when constructing the Sky Line back in 1994. Travelers coming from or heading to Terminal 2 can also use it to get on and off. After a brief stop there, the new PTS will travel from Terminal 2 alongside the A5 motorway straight to Terminal 3. 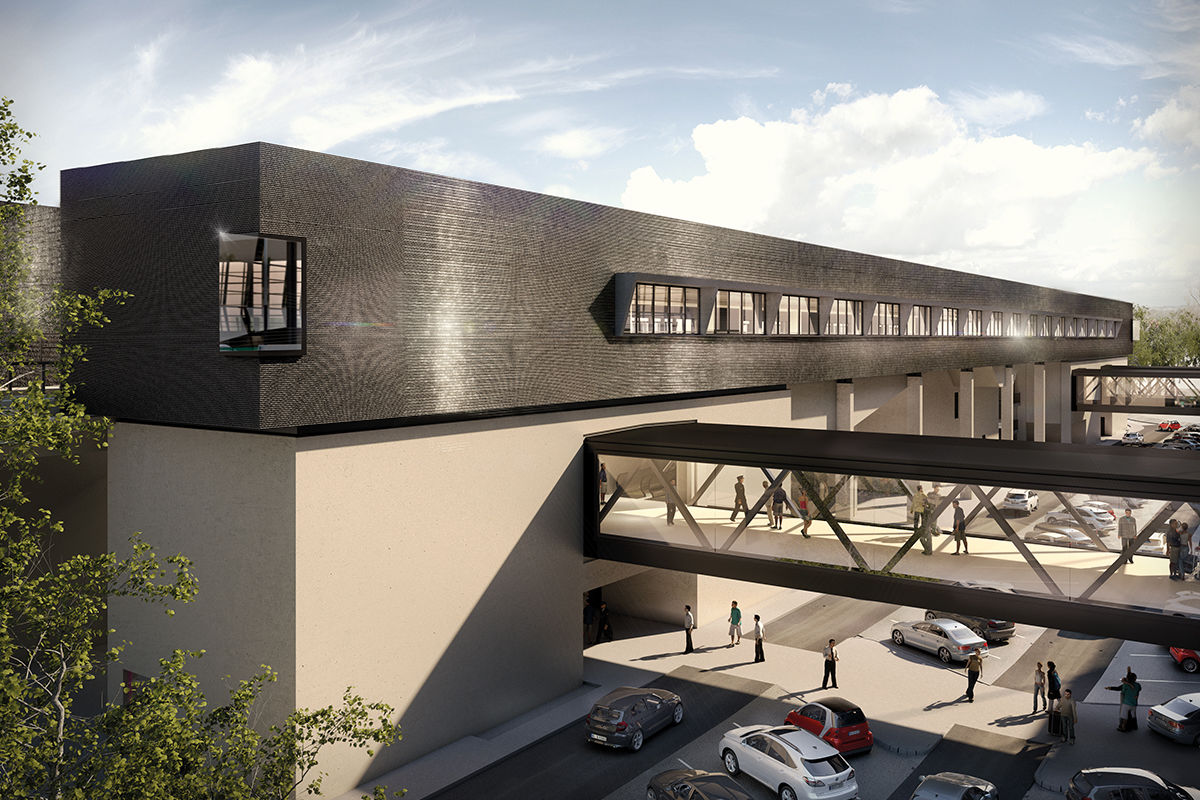 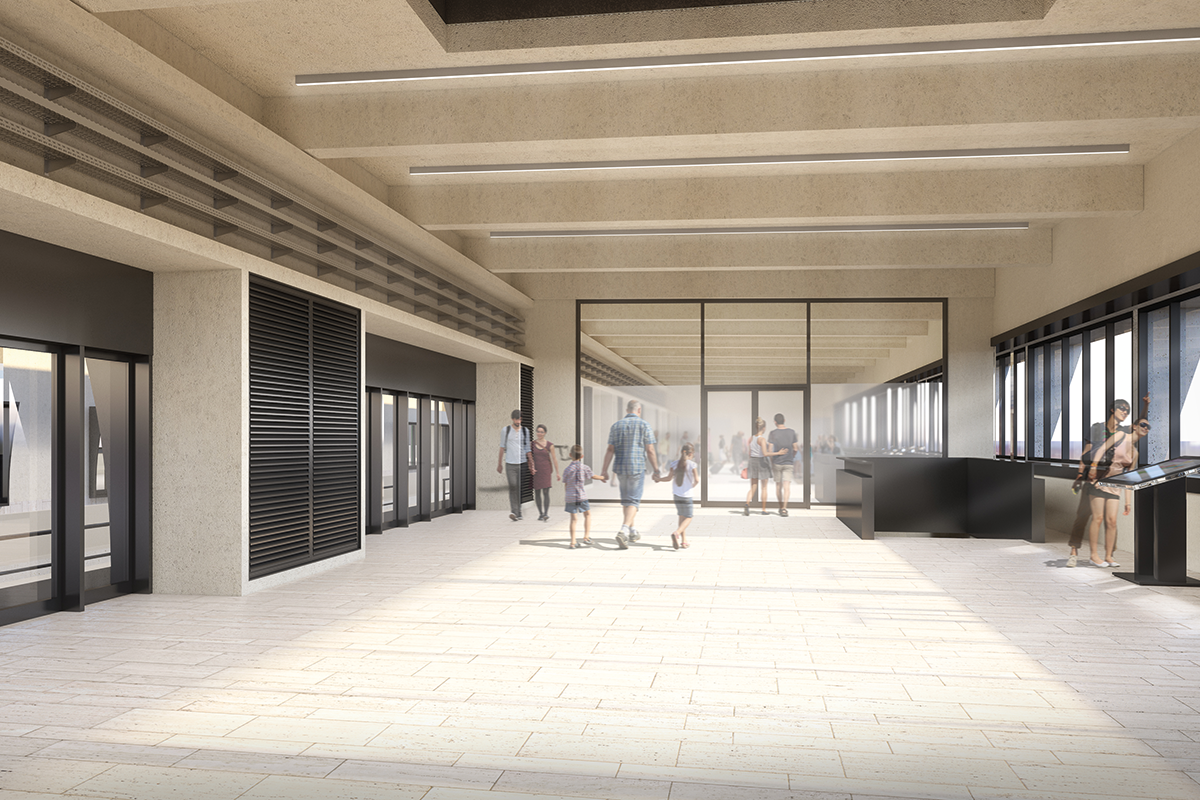 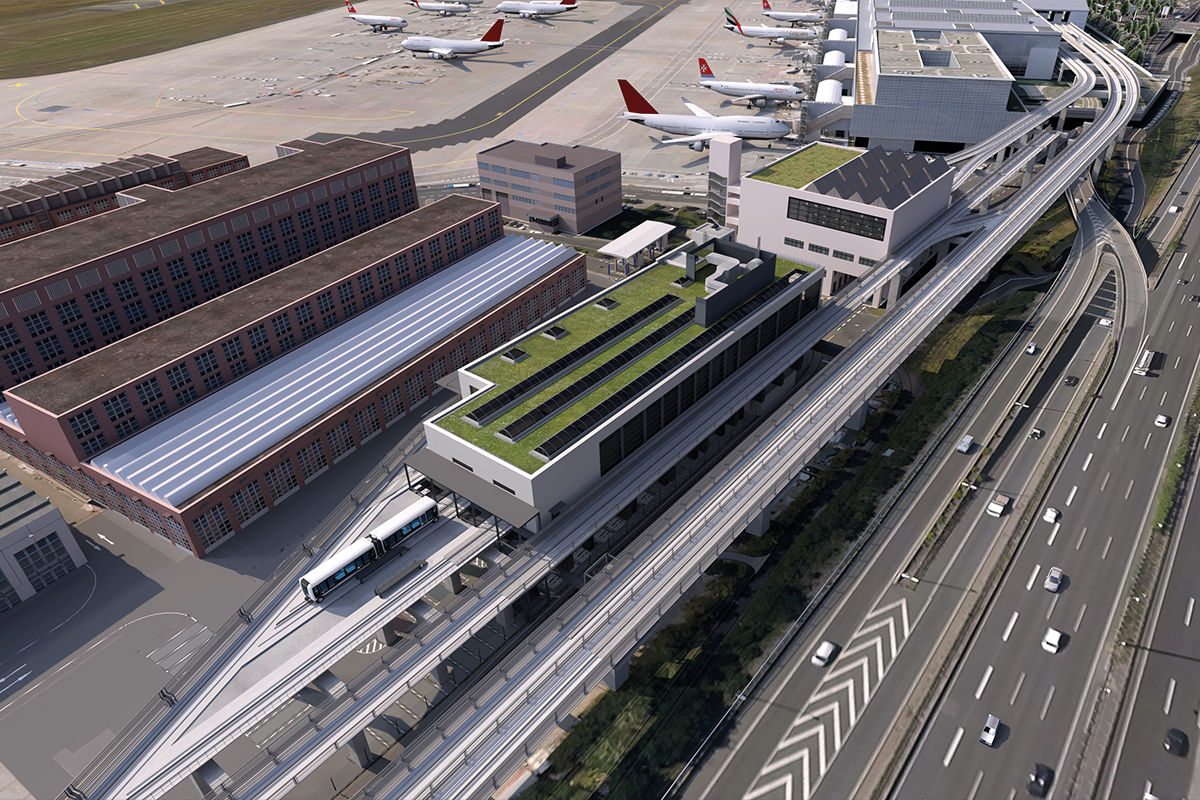 The new people mover will thus supplement the existing Sky Line. Like the older system, it will be driverless and operate on two tracks. It will take about eight minutes for 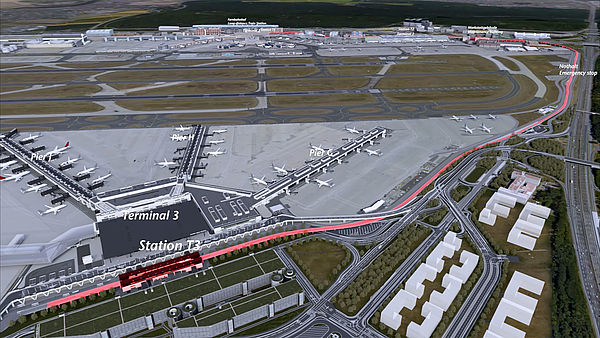 The new people mover system: the track path shown in the film travelers to get from the long-distance or regional train station to Terminal 3 – any day of the year. Trains will run at two-minute intervals to make sure that passengers can catch connecting flights with transfer times as short as 45 minutes. Everything is also planned so that the two systems will mesh smoothly. This includes timing the trains so passengers can easily switch between them in the enlarged Terminal 2 station and the expanded station C.

While traveling the 5.6 kilometers between the south and north of the airport, the new trains will accelerate to speeds up to 80 km/h. On the way from the new station behind Terminal 1, which serves the long-distance and regional train stations, past Terminal 2 and then southward adjacent to the motorway, the new people mover trains will descend to ground level along the motorway and then rise back up to stop at the Terminal 3 station.

0 stations
0,0 km track path
00 km/h speed
000 days a year
Over 0000 passengers per hour
Interesting facts and numbers about the new People Mover System at one glance.
Driverless Operation Unlike driverless cars on roads, in which someone can still take the controls when necessary, people mover trains completely dispense with a human operator. This works safely because they run on a dedicated track and are bound to the rails by derailment-proof mechanical tracking systems, plus there are partitions at the station platforms to prevent waiting passengers from straying or falling onto the rollways. Driverless systems like this enable a high level of operational stability. It would be impossible for the trains to run at such short intervals or stop so precisely with manual operation.

State of the Art

Like most driverless people movers, the cutting-edge new trains will be bidirectional. The new people mover will be able to carry two different passenger groups. All outbound passengers and Schengen transfer passengers will be able to use one or two publicly accessible cars, while non-Schengen transit passengers ride separately. Up to 4,000 travelers an hour can be carried between Terminals 1, 2 and 3. For the trains to run smoothly, a news workshop building offers space for maintenance and servicing of the state-of-the-art system.

From Planning to Construction

In March 2018, a major step was taken toward implementing the vision that had already been worked out on paper: a decision on who would supply the new people mover system.

“Contracting the new people mover system is a key strategic milestone in efficiently linking our future Terminal 3 with the existing Terminals 1 and 2 and the airport’s public transportation network, including the long-distance and regional train stations,” stated Dr. Stefan Schulte, Chairman of the Executive Board of Fraport AG, the company that operates Frankfurt Airport. 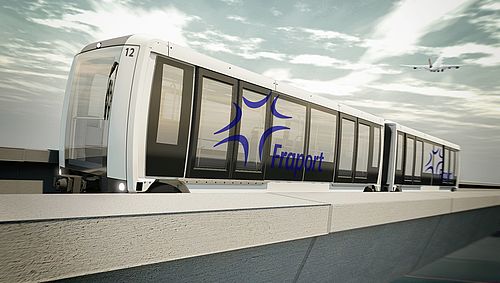 Large plate glass windows will provide passengers riding the new people mover with a sensational view of the airport. The system will be provided by a consortium consisting of Siemens, the Max Bögl Group and Keolis, who possess many years of experience with automated driverless transit systems. The new system will be launched with 12 two-part vehicles that will circulate between Terminal 3 and the north of the airport. The consortium will provide the vehicles along with the control system and power supply, in addition to building part of the tracks and providing all of the required equipment and installations for them.

The next step for the new people mover system is to use concrete and steel on the construction site instead of a drawing board and computer in the office.The first bored pile work for the route began in July 2019. Six supporting pillars will be erected initially, with supporting pillar number 69 being the first one. At least four bored piles with a diameter of 1.20 metres each serve as a foundation to ensure that all supporting pillars stand securely in the airport ground. So it is not only on the Terminal 3 construction site itself that deep digging is being carried out; heavy equipment drills several meters into the ground in the north-eastern part of the airport. The next PTS-supporting pillars will be erected in September 2019 at car park P36 next to the state police and at the beginning of 2020 in the area between the airmail control centre and the Airmail Center Frankfurt. While the construction work for the PTS is in progress, the post offices will continue to operate as usual thanks to

Wolfgang Holzhausen (FAS GmbH) explains the construction step for the northern track. (December 2019) a new by-pass road. In the first quarter of 2020, the go-ahead will also be given for the new workshop building to be built not far from Terminal 2. By the middle of 2021, the substructure for the PTS is scheduled to be ready: 47 individual supporting pillars and 17 frames for the route and the shell of the new workshop building will already indicate where the autonomous rail system will operate 365 days a year in the future. Work to build the two other parts of the new automated people mover line―the central and southern sections―will kick off in the second half of 2020.

In the second construction phase for the northern section, the guideway will be created by placing and joining a large number of modules. Each module is completely preassembled and supplied in one piece. Since the columns will be spaced between 20 and 60 meters apart, every module is different. What all of them have in common is their enormous weight of up to 200 tonnes. Only a few of the special cranes able to do the job are available in Germany, and even so it will take two of them to lift most of the modules.

Major logistical challenges must also be mastered to accurately place these heavyweights in the crowded conditions in the north of the airport. Precise planning and coordination are essential to ensure that Frankfurt Airport can continue operating with only minimal disruptions while work proceeds to meet this important prerequisite for its future success. 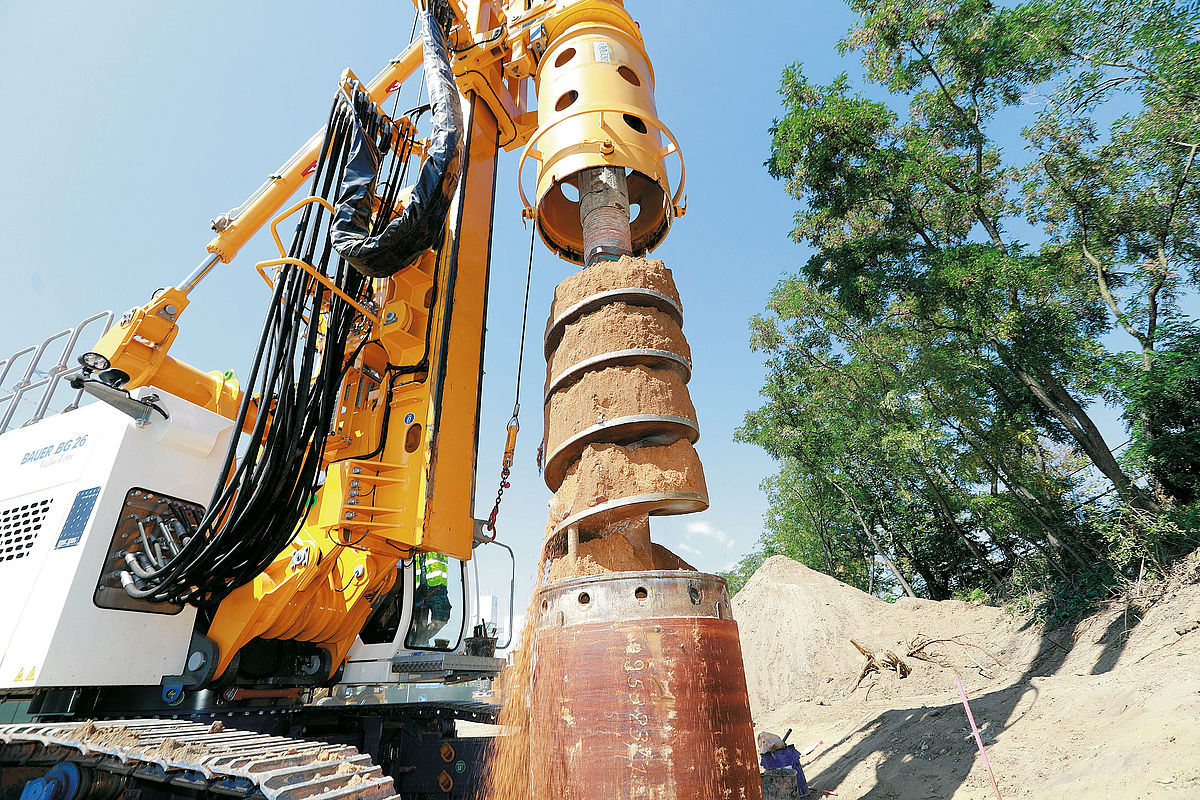 Drilling work is currently being carried out for the foundations of the PTS-routes supporting pillars. 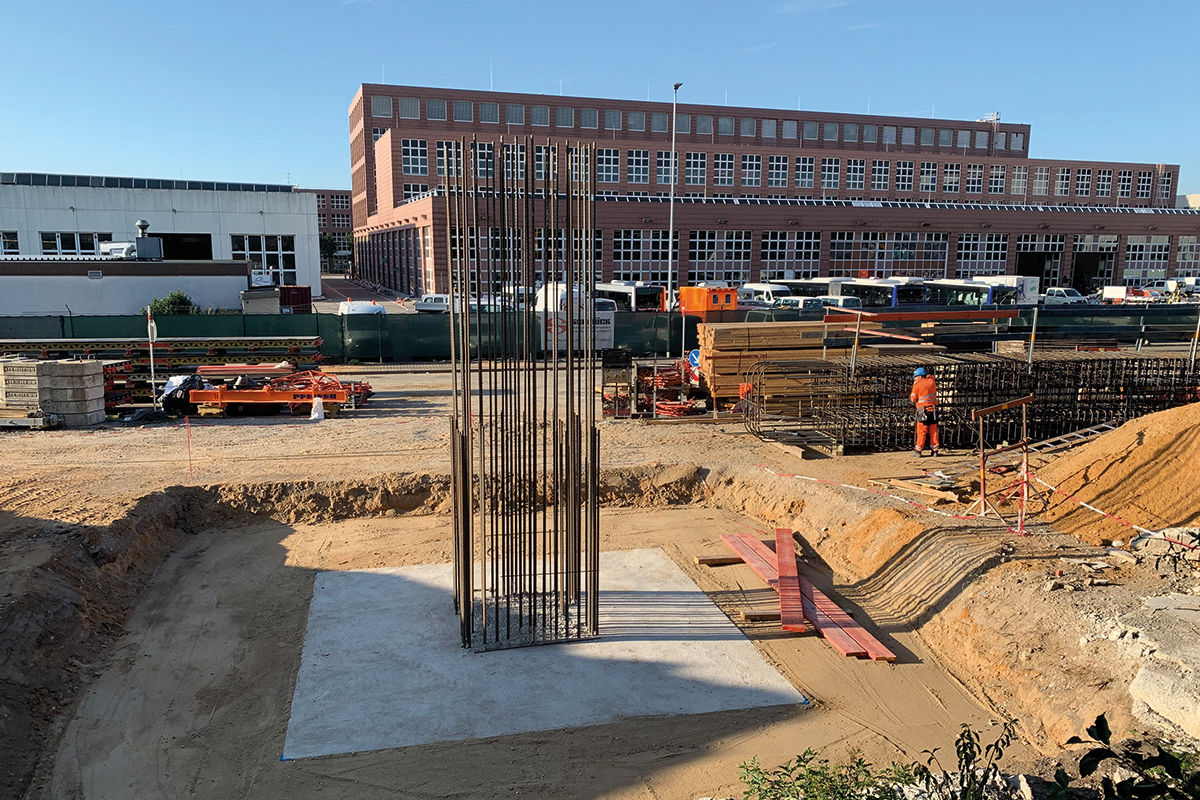 This steel reinforcement of a supporting pillar for the northern track is already firmly anchored in the ground.

The track girders will later rest on the high concrete columns. 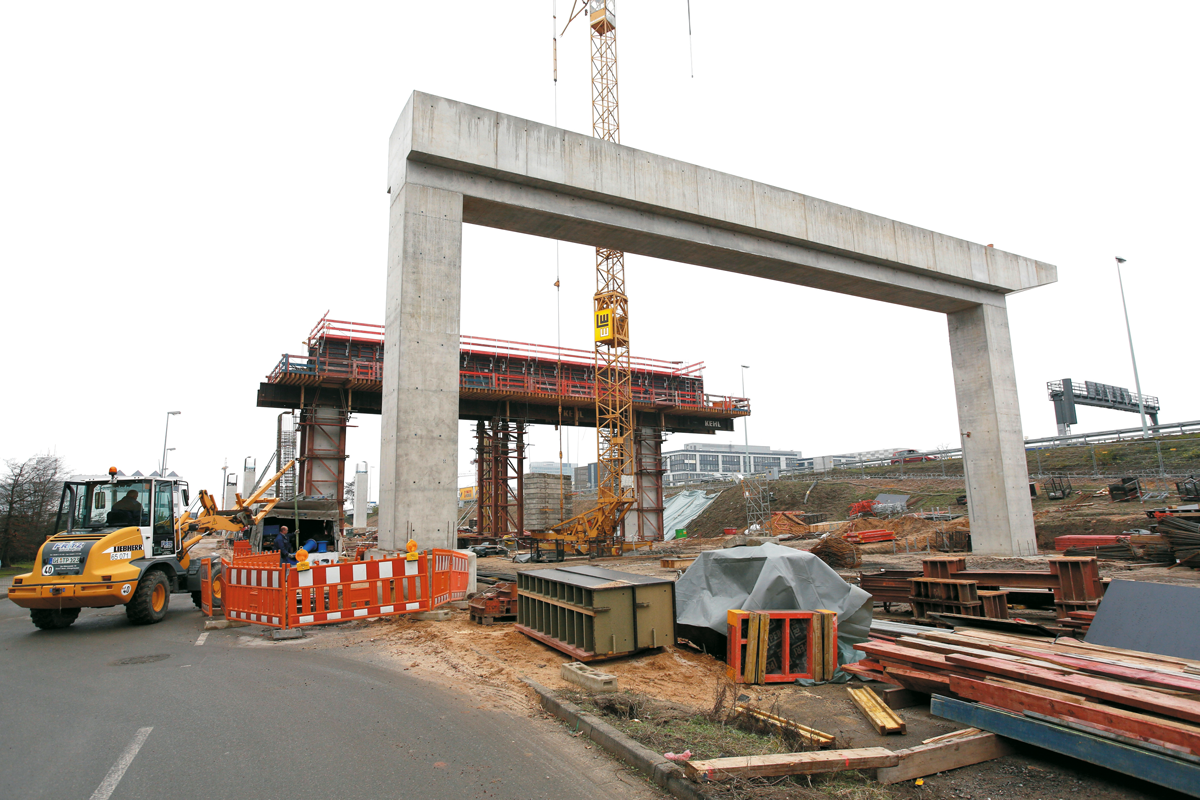 Along the PTS track in the north there are already some massive columns on which the track sections will soon be placed on.