Everyone who is familiar with Frankfurt knows that this city is constantly changing. 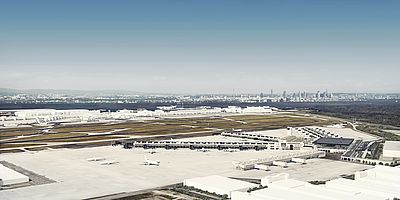 Terminal 3 is being built to the south of Frankfurt Airport. Source: Fraport AG / © Christoph Mäckler Architekten Some people who have lived here for half a century claim that they have never passed a single day without seeing a construction site or crane. And it isn’t only the city that is in flux; its “gate to the world” – the airport – has also reinvented itself multiple times over the decades. And it is now happening again, since the construction of the new Terminal 3 began in the south of Frankfurt Airport in the fall of 2015. The plans for it were actually forged quite a bit further back in time, though. Fraport, the company that operates the airport, initiated talks with the city of Frankfurt about a possible expansion in the late 1990s. And just in time, as is now clear: Further growth potential is limited with the existing Terminal 1, inaugurated in 1972, and Terminal 2, which began operating in 1994  - almost 70 million passengers already traveled through Frankfurt Airport in 2018.

The solution? The new Terminal 3 which is planned to be built in a modular manner. When fully constructed, up to 25 million people will be able to fly to and from Terminal 3. The three construction phases of the terminal allow for flexible construction – depending on capacity requirements. In the first construction phase, the main building with arrival and departure levels, the marketplace, lounges and a baggage handling system as well as Piers H and J will be built by 2023. In order to relieve the load on Terminals 1 and 2 earlier, the second construction phase, consisting of Pier G, will be completed ahead of schedule. This is expected to offer extra capacities for four to five million passengers as early as 2021.

But flexibility is not only a top priority in the construction of Terminal 3: The building is designed so that the entire infrastructure, the piers, gates, transport and baggage systems as well as the retail areas can be expanded or modified at any time during ongoing operations. 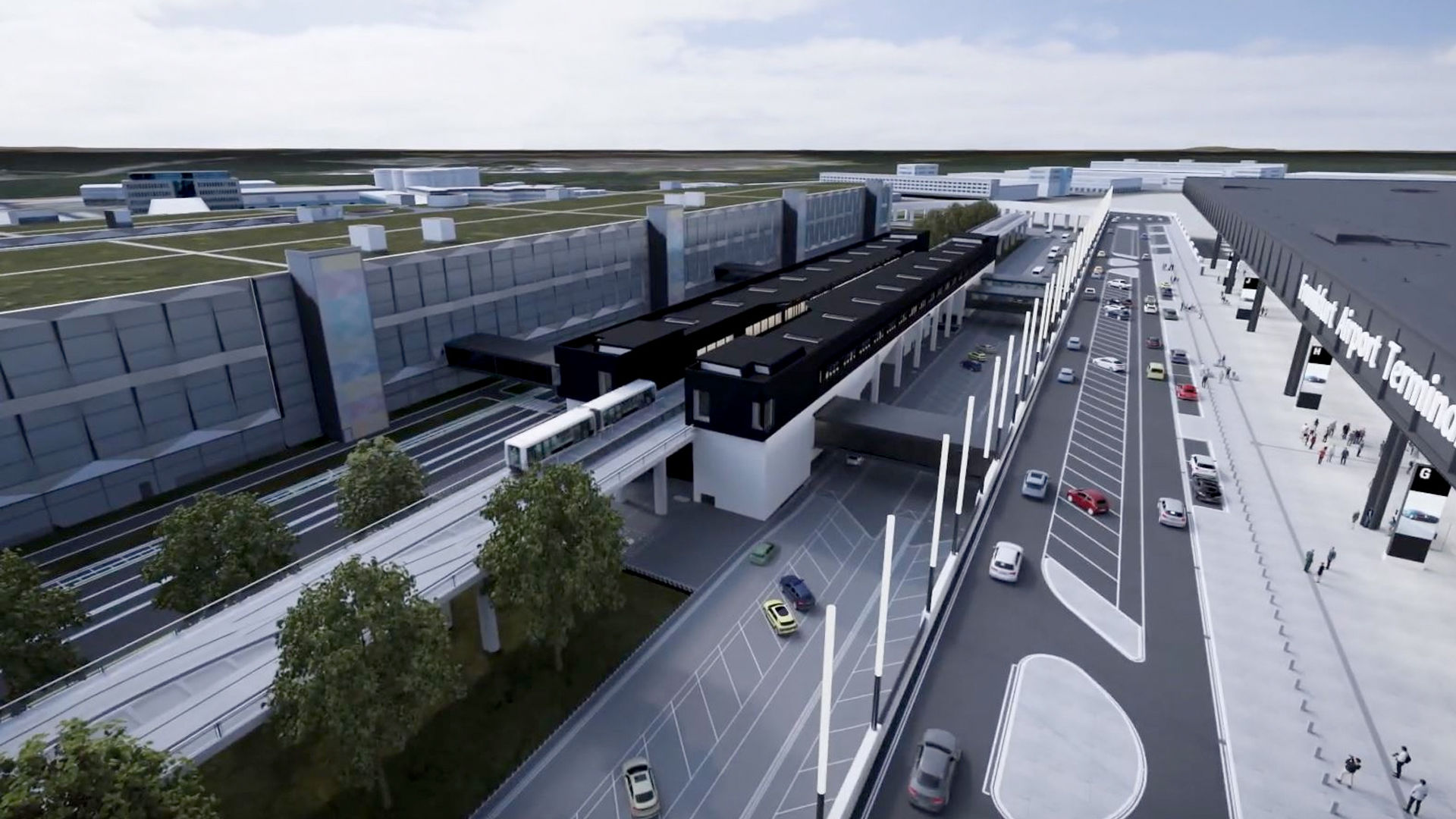 The animated film shows what the future looks like.

A Pleasant Place to Spend Time While in Transit 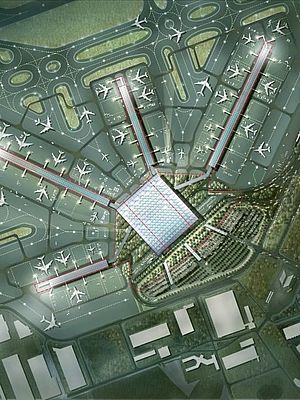 The concept submitted by the London-based architects Foster and Partners was named winner of the architectural competition and formed the basis of the competition for the realization of Terminal 3. © Foster & Partners “Today, airports have become destinations in themselves. And most of them receive more visitors than many downtown areas. This makes it even more essential for airports to perform many of the same functions as cities. Which is exactly what we are going to accomplish with Terminal 3.” (Christoph Mäckler, architect of Terminal 3)

Modern but with a feel-good ambiance: it was with this promise that Frankfurt architect Christoph Mäckler convinced the jury and won the contest held to choose who would design the new Terminal 3. Previously, the London architectural firm Foster and Partners had won the first round, the architectural competition, and designed the basic shape of the modular terminal. In Mäckler’s architectural vision, piers, gates and lounges are reminiscent of a city’s streets and squares.

His idea is to go beyond merely building a transit zone and create an urban environment in which people enjoy working, shopping, eating, relaxing and, of course, boarding planes to distant destinations. Light-flooded spaces in warm natural hues evoke a pleasant atmosphere that invites travelers to settle in and stay a while. “This will clearly set Frankfurt Airport apart from other international airports,” says Mäckler. “It will be the world’s first terminal in which people can truly feel good.” 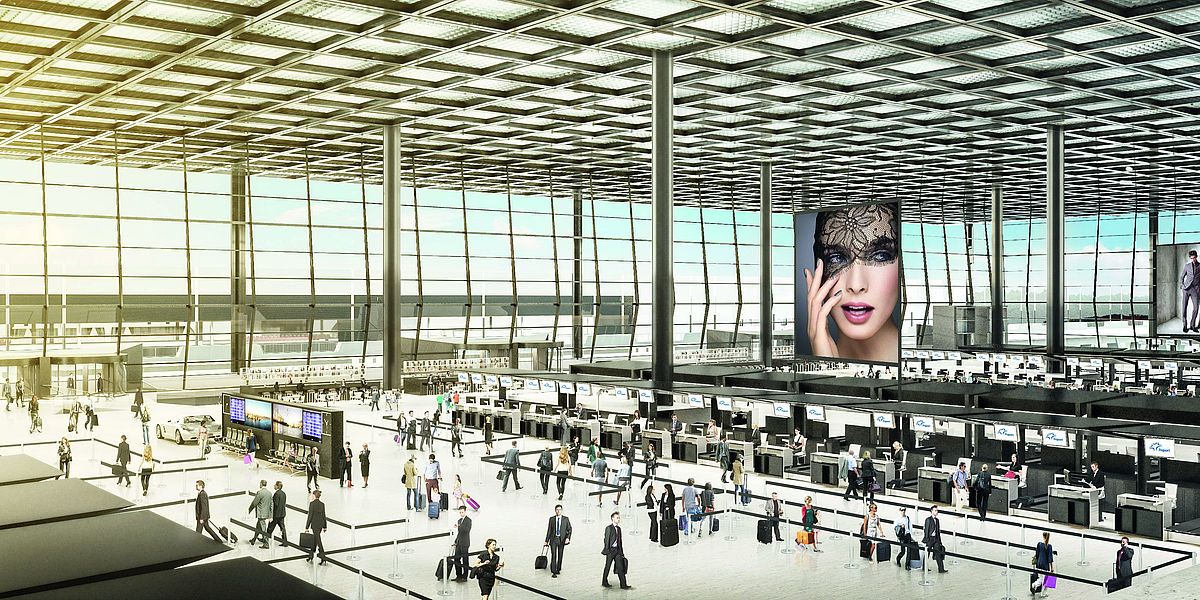 Passengers will smoothly start their journeys at up to a hundred check-in counters and baggage drop-off points. Source: Fraport AG / © Christoph Mäckler Architekten 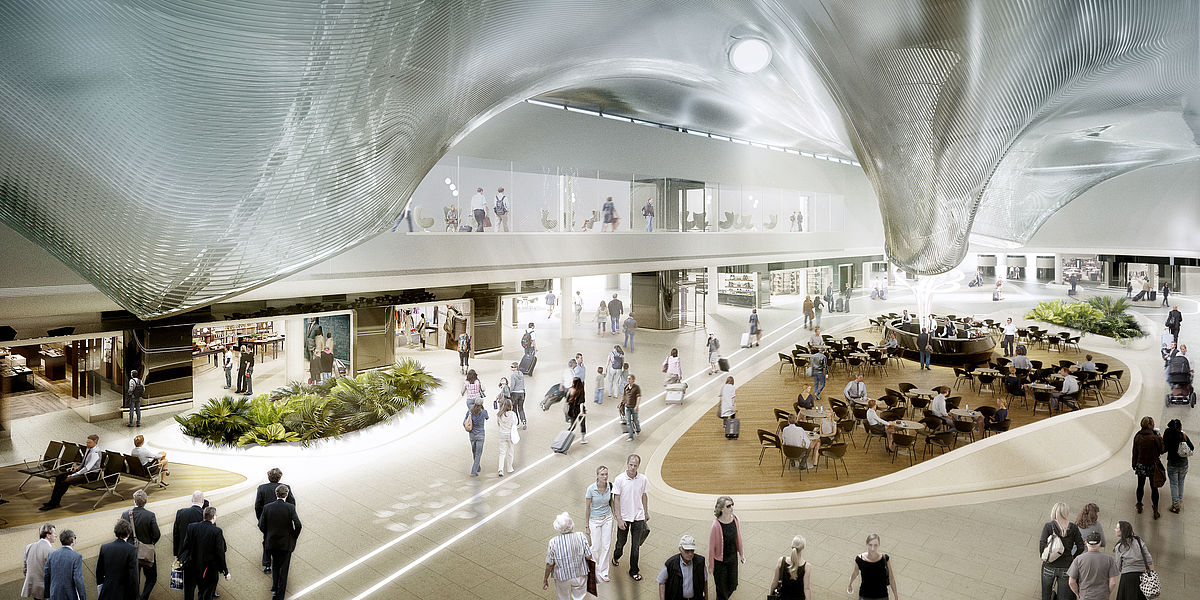 A futuristic marketplace about 6,000 square meters in size will invite travelers to enjoy their stay while taking advantage of a wide variety of shops and food & beverage outlets.
Source: www.moka-studio.com 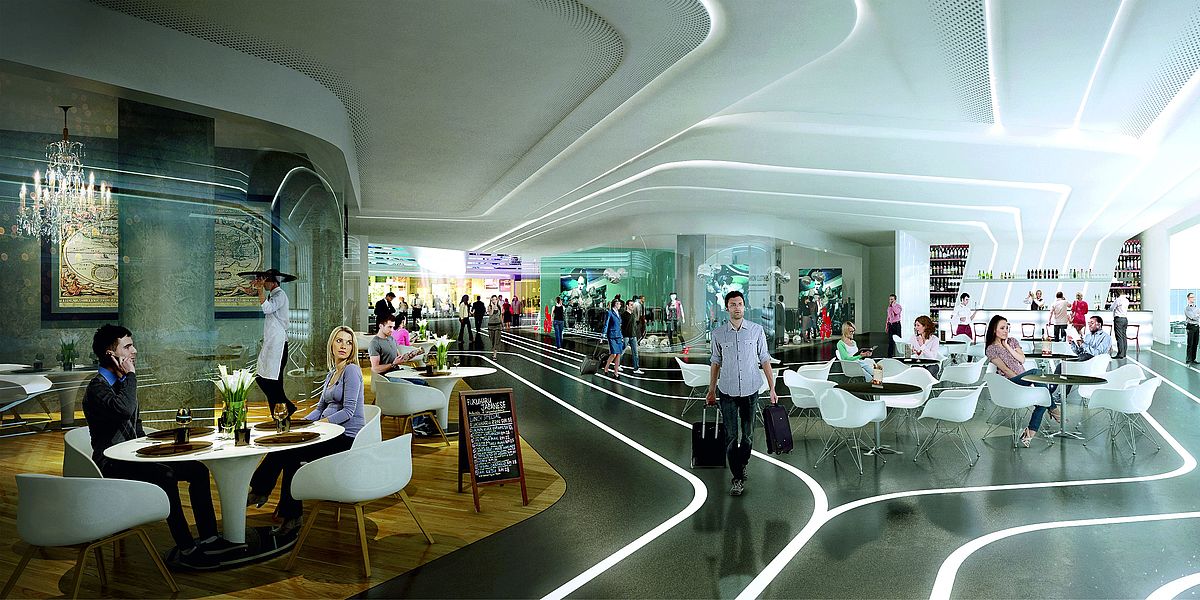 Restaurants serving a huge range of cuisines will let you relax and watch the fascinating action out on the apron and airfield while satisfying your hunger and thirst before boarding. We’ll take care of the rest! Source: Fraport AG / © Christoph Mäckler Architekten 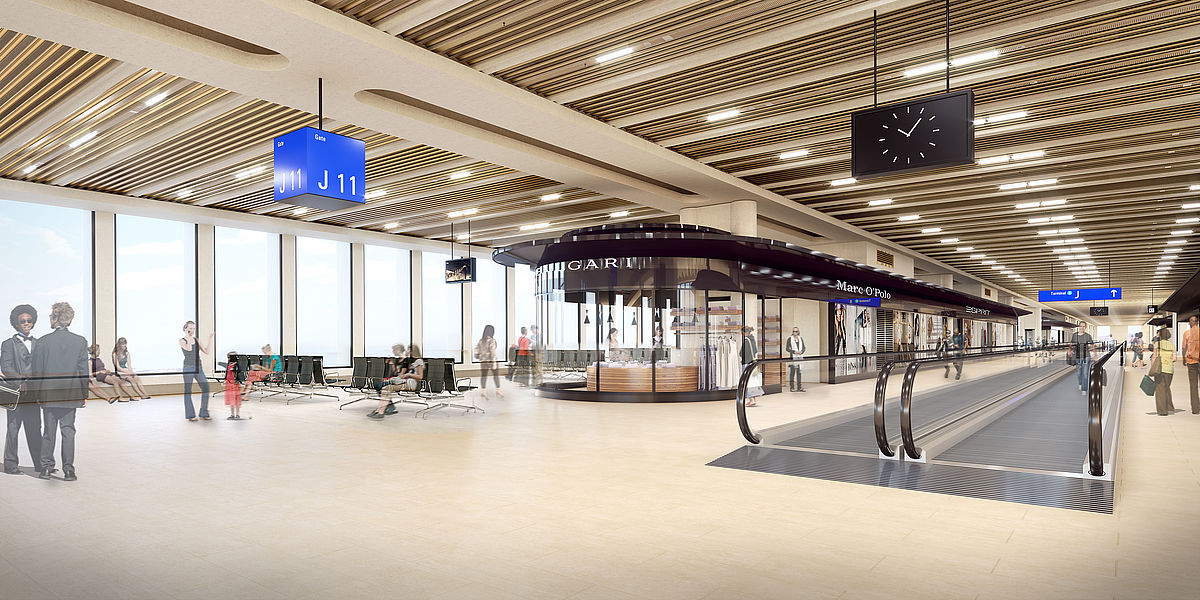 All passenger areas will be accessible in electric service vehicles. There are also ramps between the levels that you can use with a baggage cart to quickly and conveniently get wherever you want or need to go. Source: Fraport AG / © Christoph Mäckler Architekten 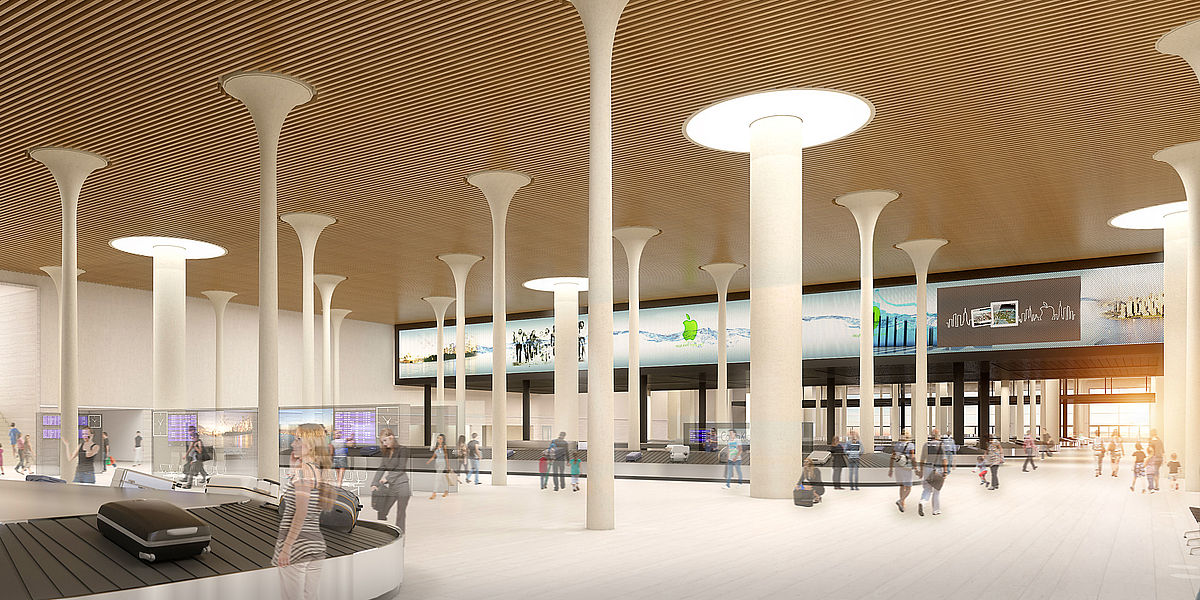 The new terminal will be equipped with up to 10 baggage carousels so you won’t have to wait long for your luggage after landing. Source: Fraport AG / © Christoph Mäckler Architekten 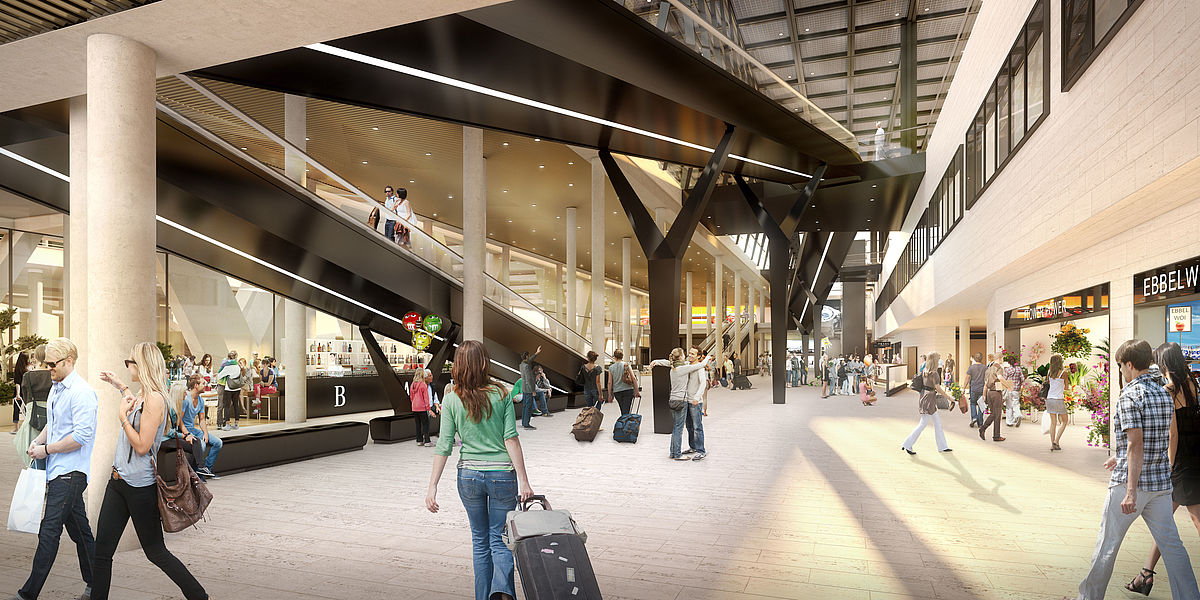 Featuring a large number of restaurants, bistros, shops and an information counter, the arrival hall on the ground floor is the perfect place to begin a pleasant onward journey. Source: Fraport AG / © Christoph Mäckler Architekten

In other words, not only passengers: airport employees will also enjoy pleasant working conditions. Among other things, there will be as little artificial lighting as possible. Instead, floor-to-ceiling glass panes will admit natural daylight into voluminous halls, rooms and other areas. Cables and pipes will blend smoothly into the architecture to avoid disrupting its esthetics and expansiveness. This attention to detail will doubtless also please visitors and shoppers. The marketplace in the middle of the new terminal will occupy around 3,000 square meters and be filled with boutiques and shops, as well as food outlets serving a wide range of cuisine 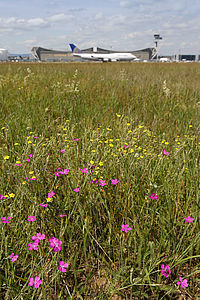 Sustainable for the Future The ideal of sustainability played a key role while planning Terminal 3, since Fraport AG is committed to mitigating climate change. The company’s targets include reducing its own CO2 emissions at Frankfurt Airport to 80,000 tonnes per year, down 65% from the volume in 1990. After completion the new Terminal 3 will contribute to achieving this goal, since the entire building is designed to be very energy-efficient: it will consume only half as much energy as Terminals 1 and 2. Among other things, sustainable operation is ensured by highly effective external thermal insulation, solar shading as appropriate, use of daylight, efficient heat recovery, and exclusive use of LED lamps. Fresh air is guaranteed everywhere, from the check-in areas to the gates, by an efficient displacement ventilation system. Solutions are also being designed for the roofs of the terminal building and parking structure that will let them be covered with photovoltaic films or panels. As a result, part of the terminal’s energy needs can be met on-site by renewable solar energy. Terminal 3 will also feature a comprehensive dual-pipe system for reusing water. In addition, rainwater harvested from the roof will be diverted to a retention basin with attached purification system. The stored quantity will be enough to completely meet all service water needs, from flushing toilets to watering plants, for more than three days.

A Smart Terminal for Less Stress

A new people mover will let travelers get between Terminals 1 and 3 in just eight minutes. You can learn more about it here! Today’s airports are complex transportation nodes that are integrated into a global network and used by millions of people. It is therefore essential to create a terminal building that accommodates and adapts to the needs of those who enter it. Unexpected delays, for example, may make it necessary for travelers to spend more time here than planned. Terminal 3 is also designed to make it as easy and straightforward as possible for passengers to get to their flights.

A special challenge is posed by the relatively large distance from Terminal 3 to the other terminals and the regional and long-distance train stations in the north of the airport. They are located a couple of kilometers apart as the crow flies and separated by two runways, which makes the actual distance even greater. To nevertheless ensure that travelers can get to and from Terminal 3 as conveniently and fast as possible, a new people mover system similar to the existing Sky Line train is being built. From the Region - for the Region Since the ground-breaking ceremony in 2015, the new Terminal 3 in the south of Frankfurt has been under heavy construction. The complex construction project will not be carried out by a single general contractor. Fraport has bundled its own expertise in Fraport Ausbau Süd GmbH. The subsidiary is inviting tenders for the various construction projects in more than 500 individual contracts. The big advantage: Even medium-sized construction companies can participate in the award process either alone or together with other companies. To date, more than two thirds of the individual contracts already awarded have been awarded to small or medium-sized companies. This is particularly attractive for those who come from the Rhine-Main region: the small number of individual contracts awarded for this huge construction project gives them the chance to help build the future of their "neighbour" Frankfurt Airport.It will link the new terminal in the south of the airport with the two existing terminals and other transportation facilities in the north. The ride between Terminals 1 and 3 will take about eight minutes with a brief stop at Terminal 2. Its dual tracks will be nearly six kilometers long, running partly at ground level and partly raised, supported by columns. The system will have capacity to carry more than 4,000 travelers an hour between the airport’s three terminals. An extended motorway interchange will also let those arriving by car conveniently drive straight to Terminal 3.

What has been planned step by step over the years is slowly taking on more and more concrete forms. With the completion of Pier G in 2021, the first intermediate finish line is approaching. In 2023, according to current plans, the new Terminal 3 in the south of Frankfurt Airport offers capacity for 21 million travelers.

Have a Look around!

Discover Terminal 3 via Virtual Reality! Enjoy a 360-degree view of the new terminal at Frankfurt Airport on your computer or your smartphone. By combining your smartphone with VR cardboard glasses you’ll have an even more realistic three-dimensional experience. Give it a try!